A Long Island man was sentenced Thursday to 15 years in prison for a $35 million fraud that a judge said wrecked investors' lives.
Mikhail Zemlyansky, 39, was led out of a Manhattan courtroom in shackles after U.S. District Judge J. Paul Oetken sentenced the Hewlett resident a year after a jury convicted him of racketeering conspiracy and other charges at a monthlong trial.
The judge said Zemlyansky spent millions of dollars from investors' on vacations and fancy cars and watches.
Oetken called him "sophisticated, deliberate and premeditated" as he carried out frauds that prosecutors said stretched from 2007 through 2012.

Assistant US Attorney Daniel Goldman said Zemlyansky and co-conspirators transferred millions of dollars from investors overseas to shell companies in Eastern Europe, where money was converted into cash and returned to the United States
They said Zemlyansky defrauded car insurance companies of hundreds of millions of dollars by creating and operating medical clinics that provided unnecessary or excessive medical treatments to take advantage of a no-fault insurance law that requires prompt payment for medical treatment.
In court papers, prosecutors said Zemlyansky lived a lavish life, spoiling himself with $100,000 luxury cars and $50,000 watches.
Oetken ordered Zemlyansky to pay a $50,000 fine and $29.5 million restitution.
Becker had asked that his client be sentenced to five years in prison, saying a day more would be excessive. Prosecutors had requested that he be sentenced to prison for well over 25 years, the length of time the Probation Department had recommended.
Posted by Illustrated Courtroom at 6:44 PM No comments: 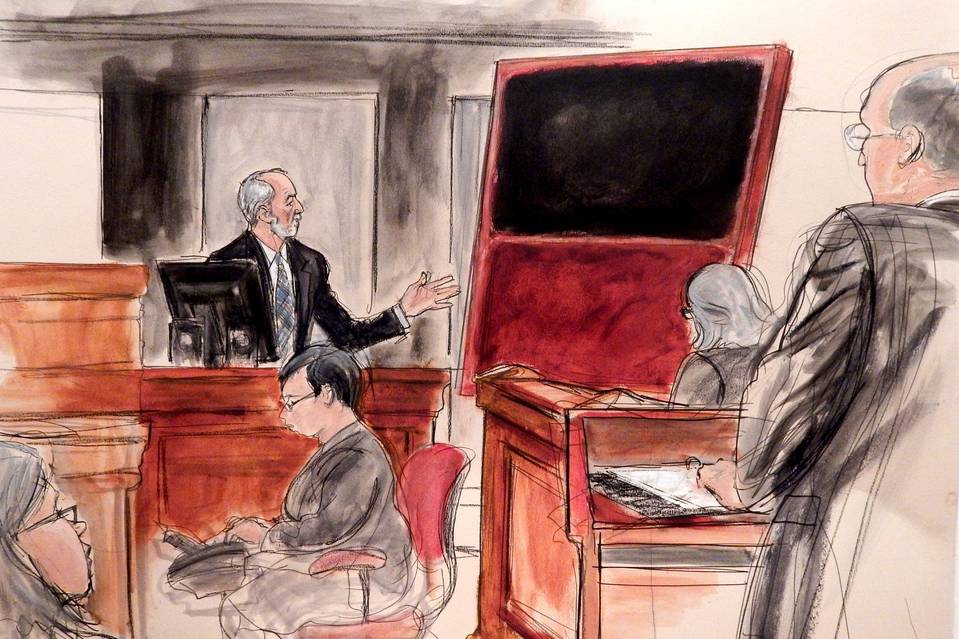 2 COMMENTS
From the witness stand in Manhattan federal court Wednesday,Sotheby’s board chairman Domenico De Sole said he didn’t ask any experts to authenticate the $8.3 million painting he purchased, believing it was the work of abstract-expressionist artist Mark Rothko.
He didn’t need to, he said. He trusted the word of Ann Freedman: “She was the top of the art world.”
The painting turned out to be a fake and is at the center of a civil trial unfolding in federal court. Mr. De Sole and his wife are seeking to recoup their money and win damages for what they allege was fraud and racketeering perpetrated by Ms. Freedman and the Knoedler & Co. gallery, where she served as president.
In a scandal that rocked the art world, Knoedler was found to have sold dozens of fake paintings that it said were the work of midcentury modernist masters, such as Franz Kline and Jackson Pollock.
Ms. Freedman and Knoedler say they believed the paintings to be real, that they were conned by a Long Island art dealer who said she was working with an anonymous Swiss collector, known only as “Mr. X.”
Posted by Illustrated Courtroom at 5:52 AM No comments:


Bill Robles, renowned courtroom artist for television news, opens the 2016 ARTree Speaker Series at the Old Town Newhall Library on Thursday, January 28 at 6:30pm. Robles draws the famous and the infamous in a career spanning more than 45 years.


Starting with the Charles Manson trial in 1970, Robles has illustrated defendants and lawyers at some of the countrys highest-profile trials including Patty Hearst, O.J. Simpson, Michael Jackson, Robert Blake, Donald Sterling, Paris Hilton and Lindsey Lohan. He most recently reported on the hearings for Tonya Couch, mother of affluenza teen Ethan Couch, and Enrique Marquez, accused of supplying assault weapons to the San Bernardino massacre.
The ARTree Speaker Series is open to the public at no charge, and is sponsored by Egg Plantation and Newhall Refinery, and is part of Thursdays@Newhall. For more information contact ARTree at (661) 673-7500, at www.theartree.org.

Forgery-Trial Witness: Paintings ‘Had No Soul’

tp://www.wsj.com/articles/forgery-trial-witness-paintings-had-no-soul-1453856526
Art dealer Ann Freedman was no scheming fraudster, knowingly selling forged abstract masterpieces; she fell victim to a clever con that fooled her and the rest of the art world, her lawyer told a federal jury Tuesday.

Defense attorney Luke Nikas made those statements in Manhattan federal court, where Ms. Freedman faces a civil suit brought by two wealthy art collectors who purchased a fake Rothko painting from her former gallery, the now-defunct Knoedler & Co., in 2004.
In opening defense statements Tuesday, attorneys for Ms. Freedman and Knoedler argued that their clients believed the artworks wre genuine, and were victims of Glafira Rosales,the Long Island art dealer who has pleaded guilty to selling forgeries to Knoedler.
Between 1994 and 2008, Ms. Rosales brought dozens of paintings to Ms. Freedman, said Mr. Nikas. “Ann believed this was one of the most important discoveries in art history,” he said.
Mr. Nikas recounted a list of experts who vouched for the paintings, and projected excerpts from their correspondence with Ms. Freedman on a large screen in the courtroom. “She believed what the experts told her,” he said.


Two art-world experts—John Elderfield, a former top curator at the Museum of Modern Art, and Gretchen Diebenkorn Grant, daughter of the late painter Richard Diebenkorn—testified Tuesday that they weren’t fooled by the phony Diebenkorn paintings they saw at Knoedler in 1994.“They had no soul. They didn’t breathe,” said Ms. Diebenkorn Grant.

Both witnesses said they brought their concerns to Ms. Freedman.

Posted by Illustrated Courtroom at 5:28 PM No comments:

Forty three years ago on Friday, the U.S. Supreme Court secured the right for American women to have a legal abortion. In a 7-2 vote, the Court ruled that all women could have an abortion at any stage in their pregnancy, but allowed states to regulate the procedure in women's second and third trimesters. In doing so, the crucial work of tireless activists saved countless women in the U.S. fromunsafe procedures and emboldened them to lead the lives of their choice.

The legacy of their work is evident today. The majority of Americans currently support abortion — a procedure that is not only one of the safest medical procedures for women in the United States, according to the Guttmacher Institute, but also a relatively common one. The vast majority of womendon't regret having had one.
Despite these facts, there are many women in the United States for whom abortion is ultimately inaccessible. Here are the many ways in which this legally protected right has not only been chipped away, but demonized.
For more on this story see link
http://news.yahoo.com/roe-v-wade-passed-43-153300817.html
Posted by Illustrated Courtroom at 2:40 PM No comments:

NEW YORK (AP) — A U.S. citizen on Wednesday became the second person to plead guilty in connection with a bribery scandal at the United Nations, tearfully admitting that she bribed a former president of the U.N. General Assembly to gain his support for business ventures.
Sheri Yan, 60, entered the plea to a bribery charge in Manhattan federal court in a deal with prosecutors that recommended she be sentenced to between roughly six and seven years in prison. The charge carries a maximum potential penalty of 10 years in prison. Her lawyers said she was not cooperating. Judge Vernon Broderick set sentencing for April 29. 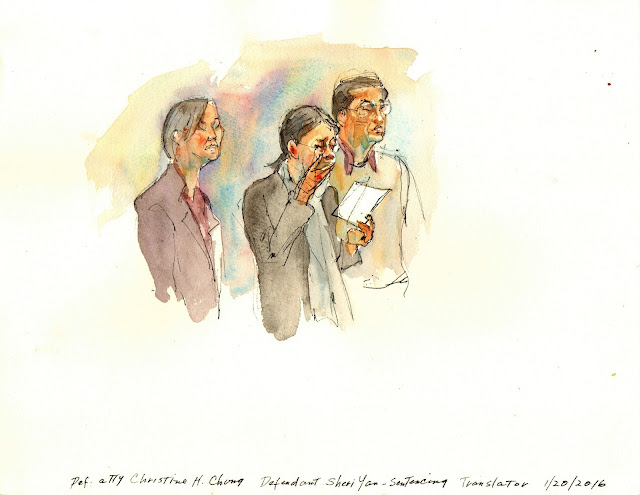 http://www.dailymail.co.uk/wires/ap/article-3409183/2nd-defendant-US-citizen-pleads-guilty-UN-bribery-case.html
Posted by Illustrated Courtroom at 9:52 AM No comments:

By LARRY NEUMEISTER
http://www.usnews.com/news/business/articles/2016-01-12/first-nyc-trial-underway-in-gm-ignition-switch-recall-case
NEW YORK (AP) — In the first trial of its kind, a Manhattan jury listened Tuesday as a lawyer for an Oklahoma man blamed his client's injuries in a 2014 crash on a General Motors' faulty ignition switch before a GM attorney countered that the switch was not to blame.

The litigants in the U.S. Supreme Court Wednesday were a remarkable bunch: On one side, the Central Bank of Iran. On the other, the victims of Iran-sponsored terrorist attacks going back three decades.
The constitutional question: Whether Congress — in dealing with both — had infringed on the independence of the judiciary.

Posted by Illustrated Courtroom at 5:32 AM No comments: 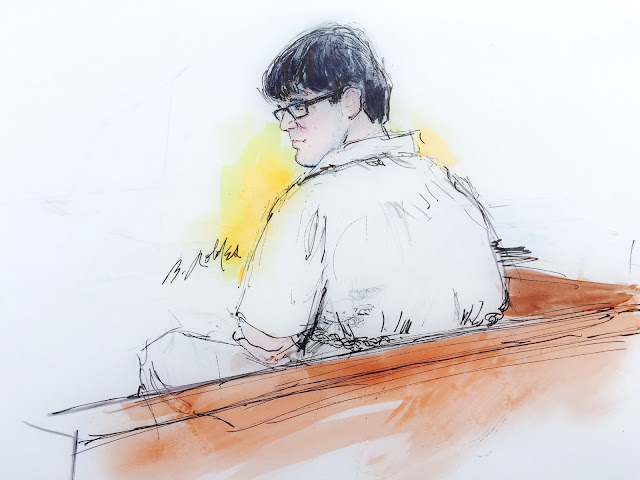 Posted by Illustrated Courtroom at 6:59 PM No comments:

CNN> 'Affluenza' teen's mother set to be extradited to Texas

Los Angeles (CNN)Tonya Couch, the mother of "affluenza" teen Ethan Couch, is set to be extradited to Texas from Los Angeles.
Los Angeles Superior Court Judge Sergio Tapia approved an extradition waiver for Couch on Tuesday.
She will be returned to Texas, where prosecutors have charged her with hindering the apprehension of a felon.
Her bail, which was set in Texas, is set at $1 million and must be paid in that state.
The mother and son were found in Mexico on December 28 after going missing a few weeks earlier.
Before he went to Mexico, Ethan Couch was on probation for killing four people in a drunken driving accident in 2013, when he was 16. At the time, many were outraged that a judge sentenced him to probation instead of jail time, slamming his now-notorious "affluenza" defense -- that he was too rich and spoiled to understand the consequences of his actions.
http://www.cnn.com/2016/01/05/us/affluenza-teen-mother-in-court/
Bill Robles covered the mother of influenza teen in Los Angeles court yesterday. 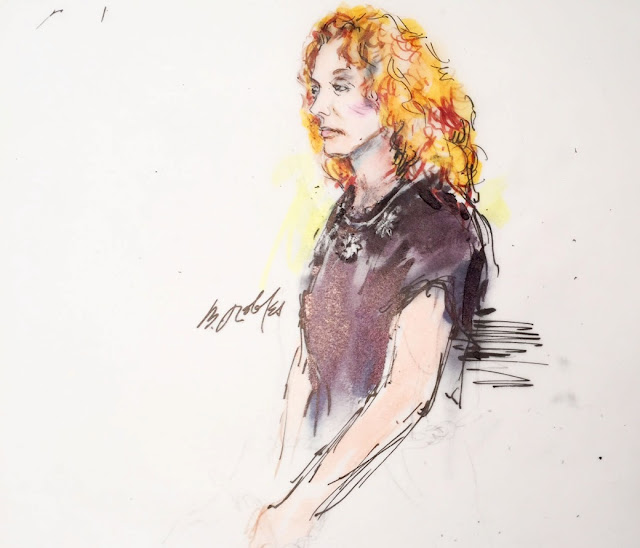 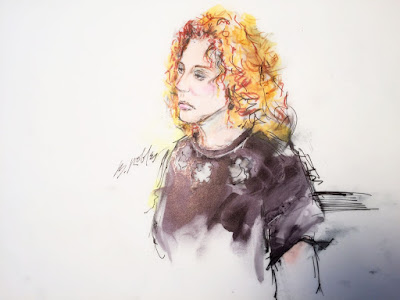 Posted by Illustrated Courtroom at 4:40 AM No comments: