As part of a year long series of events celebrating the 225th Anniversary of the Federal Court for the Southern District of New York, the Thurgood Marshall Courthouse in lower Manhattan hosted the exhibition Courtroom Art: Eyewitness for the Public. The National Arts Club is pleased to welcome this highly received show to the Trask Gallery.
Among the cases illustrated are United States vs Imelda Marcos, United States vs Leona Helmsley, Ron Galella vs Jacqueline Kennedy, as well as several high profile terrorism and organized crime cases. Participating artists include Christine Cornell, Aggie Kenny. Jane Rosenberg, Richard Tomlinson and Elizabeth Williams.
The works provide the public with a visual image of some of the district’s most famous cases.

Posted by Illustrated Courtroom at 6:37 AM No comments: 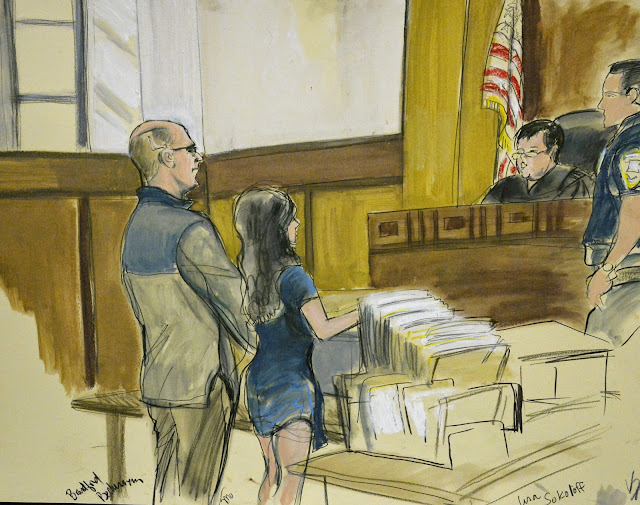 Bradford Beckerman (left) appears in Manhattan Criminal Court on Wednesday, May 20, 2015. Beckerman was arrested and charged with attacking NY Daily News staff photographer Jefferson Siegel in March, breaking his collarbone and knocking out one of his teeth. Next to Beckerman is his lawyer, Mariel LaSasso and at right is judge Lisa Sokoloff.

On Monday, March 16, just before the 1 p.m. court lunch break  photographer Jefferson Siegel was standing outside a courtroom door, waiting for a defendant to leave. He was on a court assignment for the Daily News.  The defendant left with several people. As the group of 4 or 5 well-dressed, younger-middle-aged people left in a group, one person  launched himself at Siegel  knocking him down and breaking his collarbone and knocking a tooth loose that eventually came out.
The assailant is Bradford Beckerman who once appeared on CNBC as owner of Bradford's Tonics, a high-end Florida juice company whose products are sold in better health food stores.
His case continues and he is scheduled to be back at Manhattan Criminal Court in July.
Posted by Illustrated Courtroom at 6:41 AM 2 comments:

http://www.newsday.com/news/new-york/etan-patz-murder-trial-still-sees-jury-unable-to-reach-verdict-1.10406556
After two Allen charges and 17 days the Patz jury still unable to reach a verdict. For more than 3 weeks, the press awaits, with the defendants family in the midst.

Posted by Illustrated Courtroom at 6:22 AM No comments: