http://www.cnbc.com/2016/08/24/fugitive-tech-ceo-kobi-alexander-in-court-judge-to-weigh-granting-bail.html
Posted by Illustrated Courtroom at 4:58 PM No comments:


http://www.bloomberg.com/news/articles/2016-07-25/aeropostale-can-send-bankruptcy-plan-for-creditor-vote
The retailer has asked ( Judge) Lane to disqualify New York-based private equity firm Sycamore Partners from using its $150 million debt to bid at the auction. A trial on Aeropostale’s complaint began Aug. 15 in the SDNY Bankruptcy Court.

The proposed reorganization accounts for the different ways Sycamore’s claims will be treated based on how the litigation plays out. But the plan gives no estimate of what some creditor groups would recover because Aeropostale has yet to find a so-called stalking horse to make the starting bid for its assets. Lane questioned how creditors can vote when there is no “floor” for the sale.


Aeropostale has said since the outset of its bankruptcy in May that Sycamore used a supplier it controls, MGF Sourcing Holdings Ltd., to drive the company into Chapter 11. On July 22, the retailer accused Sycamore of pursuing a “loan to own” strategy and said the firm and its managing partner Stefan Kaluzny traded on inside information about the company.

Posted by Illustrated Courtroom at 3:51 AM No comments:

A jury ended its first week of deliberations Friday apparently deadlocked on at least one of the counts charging a Long Island-reared investment banker with illegally passing his father insider trading tips worth $1.1 million.

Halfway into the fourth day of deliberations, the foreperson sent a note Friday to the judge saying that a unanimous verdict “may not likely happen” on each of the nine counts against Sean Stewart, 35, formerly of North Merrick.

Sean Stewart’s father, Robert Stewart, 61, of North Merrick, has admitted profiting from information about pending mergers and acquisitions about which his son knew inside information because he was an investment banker on the deals.
advertisement | advertise on newsday
Sean Stewart faces up to 20 years in prison if convicted.
The jury’s note, sent out shortly after noon, said, “If the jury is at an impasse on a particular count, which we cannot resolve, does that mean that we have to render a not-guilty verdict, as the government has not met its burden of proof for some of the jurors? Or do we render a ‘no decision’ vote? There is no option on the verdict sheet for a ‘no decision’ option. Do we continue to deliberate until we come up with a unanimous decision, which may not likely happen?”
Posted by Illustrated Courtroom at 7:48 AM No comments: Appellant Javier Piaguaje, one of the Ecuadorean plaintiffs, on the stand in New York in 2013. (ILLUSTRATION: Elizabeth Williams)
To this day, half the Internet portrays Steven Donziger as a hero for suing Chevron Corporation in Ecuador. As the accomplished filmmaker Joe Berlinger put it in a public radio interview only two weeks ago, “It’s a very complicated story.” Well, it’s certainly a messy story. But as a matter of epistemology, law and morality, it’s always been simple. On Monday the U.S. Court of Appeals for the Second Circuit laid it out with admirable clarity. Donziger lied and cheated his way to a multibillion-dollar Ecuadorean judgment against Chevron.
A 500-page trial ruling in 2014 found Steven Donziger and his team in Ecuador liable for countless acts of litigation fraud. Both books on the case (by me and the esteemed Paul Barrett) agree that the facts of the litigation fraud are mostly indisputable. And in court, they weren’t disputed. While Donziger and his allies kept smearing U.S. district judge Lewis Kaplan in podcasts, they never renewed their charges of bias on appeal (despite the Second Circuit inviting them to do so). And most devastatingly — in their 325 pages of appeal briefs — they never challenged the trial court’s factual account. “[Y]ou choose not to take [it] on,” noted Judge Barrington Parker Jr. at argument.  “You don’t take it on at all.” The appellate ruling pounds on that point in both its opening and closing paragraphs.
The Second Circuit delivers its own words in a tone of dispassionate legal certainty. But a ruling that affirms Kaplan on every point channels the trial judge’s passion by constantly quoting him with added emphasis. Simply reading the Second Circuit’s “emphasis ours” passages produces a remarkable and devastating text.
The appeal judges begin with an extended highlight of Kaplan’s wise preface (excerpted here in part):

The Court assumes that there is pollution in the Oriente.… [But an] innocent defendant is no more entitled to submit false evidence, to coopt and pay off a court-appointed expert, or to coerce or bribe a judge or jury than a guilty one. So even if Donziger and his clients had a just cause–and the Court expresses no opinion on that–they were not entitled to corrupt the process to achieve their goal…. The wrongful actions of Donziger and his Ecuadorian legal team would be offensive to the laws of any nation that aspires to the rule of law, including


Every time Donziger has lost over the past five years, well-meaning supporters have scorned the decision makers as “corporately inclined.”  This is an affront to reason. As the Second Circuit eloquently affirms, Kaplan was merely following the facts. Although litigation fraud has no political valence, some may find it noteworthy that two of the appeal judges (Barrington Parker and Amalya Kearse) are African-Americans originally appointed by Democrats, and the third (Richard Wesley) overruled Kaplan earlier in the case. Judge Kearse also laid the foundation of alien tort jurisprudence, and that’s perfectly appropriate. Like the human rights jurists who filed an amicus brief against Donziger, she knows that there’s no tension between promoting human rights, and policing the integrity of its advocates.
http://www.law.com/sites/almstaff/2016/08/09/the-second-circuit-makes-chevron-v-donziger-simple/?slreturn=20160710130615

Ecuador – and they knew it.

Posted by Illustrated Courtroom at 1:38 PM No comments:

UPDATE VERDICT
Larry Davis 65, of Canada, was convicted of one count of wire fraud and one count of conspiracy to commit wire fraud, each of which carries a maximum sentence of 20 years in prison.  He is scheduled to be sentenced November 15, 2016.

Posted by Illustrated Courtroom at 1:23 AM No comments:

US court rules for Chevron in Ecuador rainforest damage case

NEW YORK (AP) — Ecuadorean plaintiffs cannot collect a $9 billion judgment in the U.S. against energy company Chevron for rainforest damage, a federal appeals court ruled Monday, upholding a judge's finding that the judgment was obtained through bribery, coercion and fraud.
The 2nd U.S. Circuit Court of Appeals in New York said U.S. District Judge Lewis A. Kaplan had the authority after a trial to rule in March 2014 as he did. It noted, however, that Kaplan's decision doesn't invalidate the Ecuadorean judgment and doesn't stop the enforcement of the judgment outside the U.S.
A U.S. spokeswoman for the Ecuadoreans, Karen Hinton, said they were shocked and called it a "sad day for the U.S. justice system."


In a decision written by Circuit Judge Amalya Kearse, a three-judge 2nd Circuit panel rejected the argument by the Ecuadorean plaintiffs that they were unaware of wrongdoing by lawyers in the case and shouldn't be held responsible.
"There is no authority suggesting that a party ignorant of its attorney's fraudulent actions may enforce a fraudulently procured judgment," the panel said. "Even innocent clients may not benefit from the fraud of their attorney."
An attorney for a New York City lawyer, Steven Donziger, who was heavily criticized by Kaplan, called the 2nd Circuit decision "unprecedented in American law" and vowed to explore all options on appeal.
"Never before has a U.S. court allowed someone who lost a case in another country to come to the U.S. to attack a foreign court's damages award," attorney Deepak Gupta said. "The decision hands well-heeled corporations a template for avoiding legal accountability anywhere in the world. And it throws the entire international judgment enforcement framework out the window."
The case resulted from a long-running court battle between Amazon rainforest residents and oil companies.

Posted by Illustrated Courtroom at 2:45 PM No comments:

NEW YORK (AP) — An investment banker charged with teaming with his father to use inside information to make money in the stock market insisted from the witness stand Thursday that he never knew his father would make illegal trades.
“I am innocent,” Sean Stewart said at his Manhattan federal court trial. “I never ever gave my father information expecting him to trade.”
Prosecutors say Stewart fed Robert Stewart information about five pending mergers involving public health care companies, enabling him to work with a stock broker to earn $1.1 million illegally. During the four-year period from 2011 to 2015, Sean Stewart worked first for JPMorgan Chase & Co. and later at Perella Weinberg Partners LP.
Authorities said Robert Stewart got $150,000 and the broker got the rest, while the father passed along some winnings by paying for his son’s 2011 wedding rehearsal dinner and a photographer. The father has pleaded guilty and was sentenced to a year of home detention.
Sean Stewart, 35, testified he had such a close relationship with his parents that he sometimes talked about work, including pending acquisitions that were supposed to be secret. He said earned less than $100,000 annually at JPMorgan after finishing at Yale in 2003, but had boosted his pay to about $500,000 by 2010, when he was made vice president.

He said he never told his parents they should not trade on any information they heard from him because it never occurred to him that they would do so.
He said he never told his father the price that a company would be sold for or when a sale would occur, answering “absolutely not” repeatedly when asked those questions about each deal.
The son testified he could not recall talking about some of the deals at all, though he conceded he must have because his father initiated stock trades with information he could not have gotten elsewhere.
Even on those deals, though, Stewart insisted he never would have mentioned the amount of money involved or the anticipated closing dates.
http://www.salon.com/2016/08/04/investment_banker_testifies_at_his_insider_trading_trial/
Posted by Illustrated Courtroom at 11:20 AM No comments: 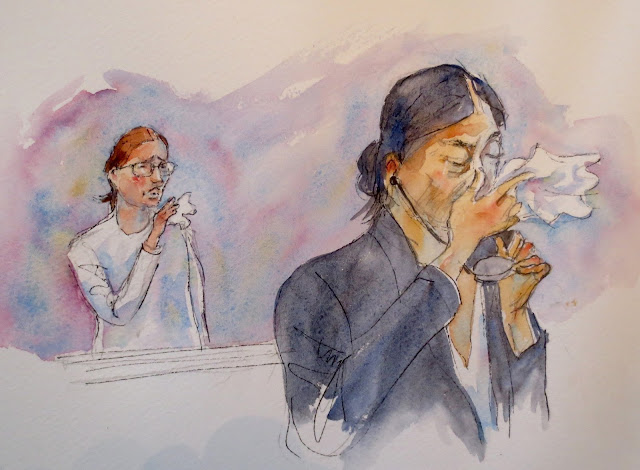 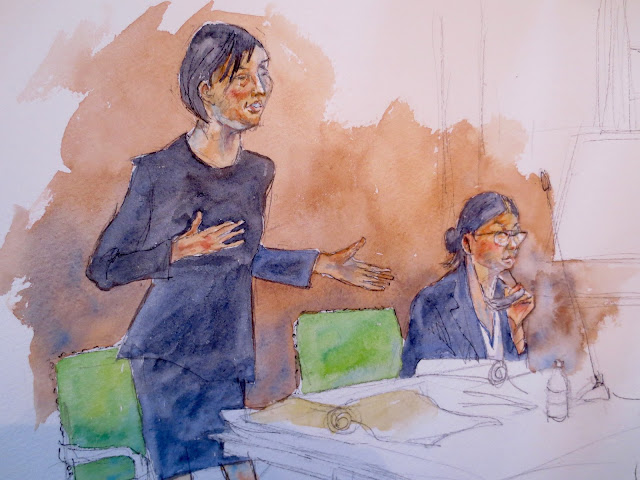 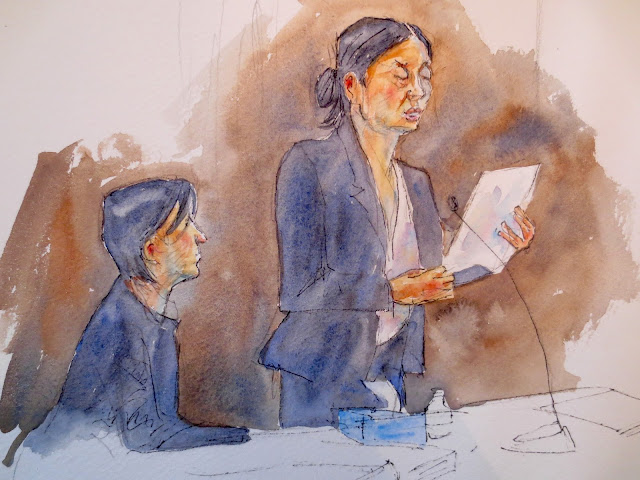 Yan addresses court pre sentencing, apologizing for her actions. In imposing sentence, Judge Broderick said, “To those bent on perverting decision-making” through bribery, “this simply will not be tolerated…there are consequences to these actions.”  In addition to her prison term of 20 months, YAN was sentenced to two years of supervised release, was fined $12,500, and was ordered to forfeit $300,000.

https://www.justice.gov/usao-sdny/pr/former-head-foundation-sentenced-20-months-prison-bribing-then-ambassador-and-president
Posted by Illustrated Courtroom at 3:20 PM No comments: