NEW YORK – In the end, prosecutors in the Joseph Percoco trial wanted to talk about ziti – the code term the longtime confidant of Gov. Andrew M. Cuomo used to allegedly describe the bribe money he got over the years.
But pasta wasn't on the minds of defense lawyers.
They spent their afternoon Tuesday in closing arguments on hours of attempts to discredit the prosecution’s star witness – former lobbyist Todd Howe, whose credibility was called into question even before he was arrested during the middle of his testimony a few weeks ago.
One defense lawyer, Stephen Coffey, even mocked Howe’s claim that he had a revelatory moment about telling the truth to prosecutors in 2016 as they were in the midst of their high-profile corruption investigation that has unearthed insights about Albany and state government.
“Sustained,’’ U.S. District Court Judge Valerie E. Caproni said as she cut off Coffey, when prosecutors objected.
Six weeks into the trial of Percoco and three executives accused of allegedly bribing the former Cuomo adviser in exchange for government favors, prosecutors and defense lawyers spent all day Tuesday giving closing arguments to a case that could have sweeping implications for its sister case – the Buffalo Billion trial expected to start in June in the same courtroom.
The summations will continue Wednesday and the jury is expected to get the case possibly on Thursday.
Within seconds of opening his summation to the jury in a Manhattan federal courtroom, Assistant U.S. Attorney David Zhou quoted from a Percoco email: “Where the hell is the ziti?”
It was a reference – borrowed, as noted several times in the trial, from "The Sopranos" TV show – to more than $300,000 in payments allegedly steered Percoco's way from a Syracuse development firm and an energy company with a power plant interest before the state.
“This is not how honest and honorable public servants talk. This is how criminals talk,’’ Zhou told jurors in his nearly three-hour summation.
The trial ended with a split verdict on March 13th.
Posted by Illustrated Courtroom at 8:30 AM No comments:

NEW YORK CITY - The attorney for Cor executive Joseph Gerardi said he is unable to reconcile the mixed verdict rendered in the New York corruption case against a top Cuomo aide and two Syracuse businessmen.

Gerardi was acquitted while his business partner Steven Aiello was convicted of conspiring to commit honest services fraud. Joseph Percoco, a former top aide to Gov. Andrew Cuomo, was convicted of three of six charges.
A mistrial was declared for Braith Kelly on charges that he provided a low-show job to Percoco's wife.
"I honestly don't know," Gerardi's attorney Milt Williams said of the verdict. "I can't even try to interpret it."
Aiello's attorney Steve Coffey said he planned to appeal, calling the verdict inconsistent.
Aiello's cheeks reddened as the guilty verdict was read.
His son, Steven Aiello Jr. put his head down and held it with one hand. He nodded back and forth. His father was accused of bribing Percoco to arrange a raise for the son while he was employed in Cuomo's office.
Aiello's and Gerardi's wives cried after the verdict was read. Aiello's daughter also cried.
"Their families are very close," Williams said.
"It's awful,'' Williams said. "I'm very relieved for Joe Gerardi. I feel very bad for Steve Aiello and his family."
Posted by Illustrated Courtroom at 2:17 PM No comments:

Posted by Illustrated Courtroom at 9:19 AM No comments:

Mar 06, 2018 — The jury is deadlocked in the federal corruption trial of Joseph Percoco, former top aide to Gov. Andrew Cuomo. Judge Valerie Caproni told them to go back and resume deliberations. 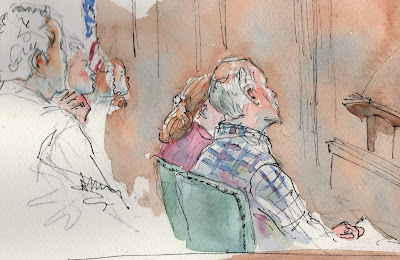 The jurors in the bribery trial of Percoco and three other defendants, now in its seventh week, told the Judge Caproni Tuesday that they are deadlocked, and that the only thing they can agree on is that they disagree.
“We have some very fundamental differences and nobody wants to compromise our own beliefs and/or process,” one juror’s note reads.
With a second major winter storm in less than a week forecast for Wednesday, three jurors begged to quit, saying they were physically and emotionally drained and could no longer continue.
The jury has deliberated for about 20 hours since it was given the case on March 1st.
Gov. Cuomo has said he won’t comment on the trial until it’s over. He was asked about the deadlock during a storm briefing conference call. He said, “that will be a matter for the judge to handle.”

Jury deliberations began Thursday in the federal corruption trial of Joseph Percoco, a former top aide to Governor Andrew Cuomo, and three corporate executives who were allegedly involved in a criminal conspiracy to pay Percoco bribes in exchange for favorable official actions in their efforts to do business with the state government.
In federal district court in lower Manhattan on Thursday morning, the prosecution offered its rebuttal to the defense’s closing arguments from the previous two days, capping a six-week long trial that has exposed the inner workings of the state government and put on display the actions and behavior of Percoco, whom Cuomo once referred to as “my father's third son.” The trial has raised questions about what Cuomo knew about Percoco’s activities, including his former top aide’s use of a government office while technically on leave to run Cuomo’s reelection campaign.
The charges against Percoco and his co-defendants -- Peter Galbraith Kelly, Joseph Gerardi and Steven Aiello -- stem from two separate bribery schemes tied together by the government’s key witness, former lobbyist Todd Howe, who pleaded guilty to facilitating payments totalling more than $300,000 from the executives to Percoco and his wife, Lisa Percoco.
Percoco and the others have been charged with ten felony counts of solicitation and payment of bribes and gratuities, conspiracy to commit honest services fraud, extortion under the color of official right and conspiracy to commit extortion under the color of official right, wire fraud, and making false statements to federal investigators. (One extortion charge, related to actions Percoco took while he was working on the governor’s reelection campaign in 2014, was dismissed by U.S. District Judge Valerie Caproni on Monday.)
One of the schemes involved real estate developer COR Development and it’s executives Gerardi and Aiello. The second involved energy firm Competitive Power Ventures and Kelly, who is accused of giving Percoco’s wife a “low-show” job paying $90,000 annually.
The defense largely based its case on attacking Howe’s credibility as a witness, claiming that he manipulated Percoco and the others into the schemes. Once he was caught for his own crimes, the defense attorneys claimed, he pointed fingers to try and reduce his prison sentence. That argument was bolstered in part when Howe was arrested during the trial for violating his cooperation agreement with the government.
Prosecutors, however, have pointed to other evidence, including thousands of emails, that they say shows the corrupt agreements struck between the defendants. Howe’s testimony formed only a part of their case, they claim, and was far from the foundation of the prosecution.
“This whole fishing sideshow,” Echenberg told the jury, “You’re being played hook, line and sinker.”
“Even if there was a friendship between them...you don’t get a pass on bribery just because you’re bribing a friend,” she added.
After Echenberg’s plea to the jury for a guilty verdict, Judge Caproni addressed the jury, reading through a 40-page booklet of all the charges against the defendants and instructing them to carefully consider their decision.
Later in the day, the jury sought clarification on whether Percoco had to have been a public official throughout the duration of the two schemes he is accused of participating in in order to be found guilty. The prosecution had argued that though Percoco left state government to work on the governor’s reelection campaign, he still wielded his influence within state government to pressure officials for favorable action towards his co-defendants. The defense, on the other hand, in the words of Percoco’s lawyer Barry Bohrer, said Percoco couldn’t possibly have been “selling his office” during the campaign since “he had no office to sell.”
Courtroom artwork by Aggie Whelan Kenny
Posted by Illustrated Courtroom at 7:50 PM No comments:

https://nypost.com/2018/02/28/percoco-lawyer-dont-judge-my-client-for-using-sopranos-slang/
https://nypost.com/author/priscilla-degregory/and bruce golding
Joseph Percoco’s lawyer broke out the ziti defense during closing arguments at his corruption trial Wednesday — urging jurors not to condemn the former top aide to Gov. Cuomo for using TV gangster slang.
“It’s not the language of criminals just because someone watches ‘The Sopranos’ and picks up phrases from ‘The Sopranos,’” defense lawyer Barry Bohrer said.

Prosecutors contend the pasta reference was code for the $300,000-plus in bribes Howe allegedly helped Percoco pocket in a “pay-to-play” scheme with two companies doing business with the state.

But Bohrer tried turning those allegations into a joke when he asked the judge to give jurors their lunch break five minutes early.
“I hate talking about ziti while they are waiting for lunch,” he said to laughter in the Manhattan federal courtroom. Judge Valerie Caproni denied the request and told Bohrer to continue as scheduled until 12:30 p.m.
Posted by Illustrated Courtroom at 7:04 PM No comments: