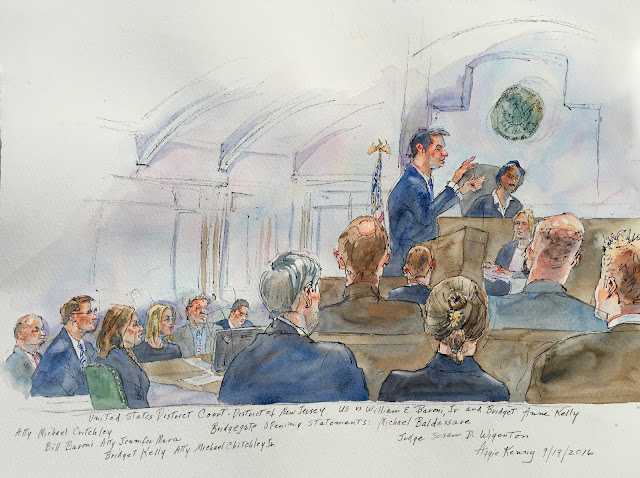 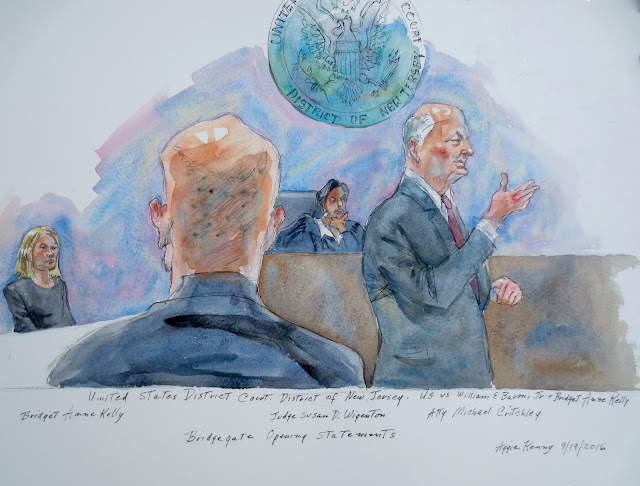 Posted by Illustrated Courtroom at 8:04 AM No comments: 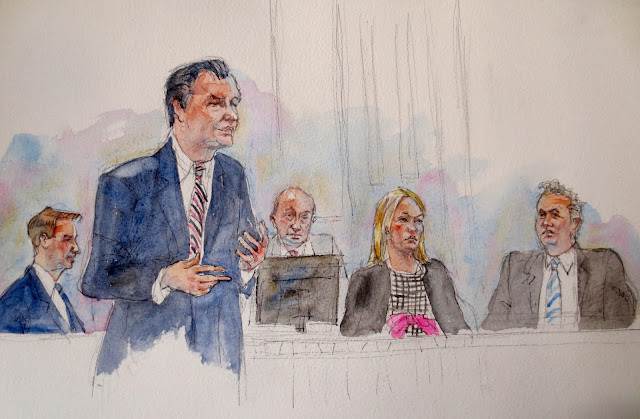 Posted by Illustrated Courtroom at 3:20 PM No comments:

Jury selection began this week in the federal trial of two former top aides to New Jersey Governor Chris Christie, who are said to have orchestrated the traffic jam at the George Washington Bridge in 2013 known as “Bridgegate.”


Bridget Anne Kelly, Christie’s former deputy chief of staff, and Bill Baroni, a Christie appointee to the Port Authority of New York and New Jersey, are charged with fraud and conspiracy for allegedly planning the lane closures as an act of retribution against Fort Lee Mayor Mark Sokolich, for not endorsing Christie’s bid for re-election.
Posted by Illustrated Courtroom at 8:35 AM No comments:

Through 44 years, Mr. Robles has mastered the art of on-the-spot illustrating, working for a strict and unyielding taskmaster: television news. He has said, “I love courtroom illustrating… the immediacy… working feverishly… the adrenaline gets going and suddenly it’s over, on the satellite and around the world.”


Posted by Illustrated Courtroom at 6:07 AM No comments:

BY Peter Sblendorio
NEW YORK DAILY NEWS
Thursday, September 1, 2016, 1:56 PM
This "Lemonade" lawsuit isn't ending on a sour note for Beyoncé.
The pop star squeezed out a significant legal triumph over an independent filmmaker who claimed she stole scenes from his movie for her "Lemonade" trailer — as a judge decided to dismiss the case, TMZ reports.
Matthew Fulks sued the "Sorry" singer in June and accused her of ripping nine visual elements from his short film "Palinoia" and using similar scenes in her 60-second teaser.
Among the scenes he claimed she had stolen were a "red person with eyes obscured" and walls covered with graffiti.

But a judge said he assessed the lawsuit and decided to toss it, though it's currently unclear what exactly prompted him to do so, according to TMZ.


Beyonce's lawyer Tom Ferber maintained her innocence throughout the saga and downplayed the likeness of the two videos in court.
Beyoncé, who earned rave reviews for her performance of several songs from "Lemonade" at Sunday's MTV Video Music Awards, released the highly evocative project in April.
Posted by Illustrated Courtroom at 6:35 PM No comments: