NEW HAVEN, Conn. (AP) — Jean Harris, the patrician girls' school headmistress who spent 12 years in prison for the 1980 killing of her longtime lover, "Scarsdale Diet" doctor Herman Tarnower, in a case that rallied feminists and inspired television movies, has died. She was 89.

She had claimed the shooting of Tarnower, 69, was an accident. Convicted of murder in 1981, Harris suffered two heart attacks while serving her sentence in the Bedford Hills women's prison north of New York City. She was granted clemency by then-Gov. Mario Cuomo when she underwent heart bypass surgery in December 1992 and was released on parole three weeks later.

The Jean Harris trial was a sensational case that Aggie Kenny and Richard Tomlinson covered daily.

Below is some of the work from their collections.

link to story about her testimony :  Harris on the witness stand


Posted by Illustrated Courtroom at 5:53 AM No comments:

Defense lawyer John R Wing, was not only Madoff's lawyer he was also the federal prosecutor during the Watergate related Mitchell-Stans Trial. Artist Aggie Kenny covered that trial and won an Emmy for her artwork.  Below is an illustration of AUSA John Wing examining former SEC director William Casey in Manhattan Federal Court in 1974.

Posted by Illustrated Courtroom at 10:58 AM No comments:


Today Peter Madoff was sentenced in Manhattan Federal Court by Judge Laura Taylor Swaine. There were some gasps in the courtroom, when Madoff was only sentenced to the agreed upon 10 years and allowed to stay out for prison until February 2013. This was unlike his brother who was immediately put in prison once he pleaded guilty.  Madoff stood and made a brief statement about his remorse, then sat down.

Victim Amy Luria spoke about Peter Madoff's misdeeds and gave an impassioned speech of how destitute her family is now, due to the scam and the loss of their money.  Madoff would glance over to her with an incredulous look. During the hearing he would look up to the sky and down at the floor, clinch his jaw, he seemed to be grappling with his fate.

It was almost 4 years since his brother confessed running the largest Ponzi scheme in history. Bernard Madoff appeared almost resigned to his fate not showing the same expressions of concern as his brother, Peter.

Finally the judge sentenced him to the 10 years and agreed to make a recommendation that they place him in the Otisville prison.
Here is the story from the New York Times, http://dealbook.nytimes.com/2012/12/20/peter-madoff-is-sentenced-to-10-years-for-his-role-in-fraud/

The NYT reporter Diana Henriques sat next to me, these images were pretty much her view. Except we were all challenged by the computer monitor on the desk and had to lean left and right to see him throughout the hearing. Note the monitor above.

Posted by Illustrated Courtroom at 6:39 PM No comments:

CUNY Journalism Press, the academic imprint of the City University of New York’s Graduate School of Journalism, will publish The Illustrated Courtroom: 50 Years of Court Art in early 2014.
Celebrating the u

nique blend of art and news in courtroom illustrations, the book will offer some of the best work of five award-winning illustrators covering a range of the biggest courtroom dramas of the last half-century. The book is edited by highly regarded courtroom illustrator Elizabeth Williams, who has covered many headline-grabbing trials (Martha Stewart, John Gotti, John DeLorean, Bernard Madoff) for the Associated Press, every major network and many other news organizations. Narrative will be supplied by crime journalist and author Sue Russell, whose work includes “Lethal Intent,” the acclaimed biography of executed serial killer Aileen Wuornos.
The Illustrated Courtroom will include about 150 iconic illustrations depicting memorable moments, and will tell the stories behind the headlines, with the artists’ insider insights. The result will be an artists’ eye view of courtroom history in the making, allowing readers to savor the extraordinary work of those who go where cameras cannot.
The book will be a must-have for everyone passionate about true crime, legendary defendants, headline-making trials, big-time lawyers and courtroom drama.
Readers will meet an array of rogues, villains and victims, murderers and white-collar criminals, judges and legal eagles. Readers will step into dozens of colorful trials with defendants including Jack Ruby (who killed President John F. Kennedy assassin Lee Harvey Oswald), mob kingpin John Gotti, the Watergate burglars, key Iran-Contra players, Charles Manson, David “Son of Sam” Berkowitz, members of the Black Panther party, kidnapped heiress Patty Hearst, pop icon Michael Jackson, Mohammed Salameh, the terrorist behind the 1993 attack on the World Trade Center, and many more.

The FBI has arrested four defendants from Southern California who are accused of plotting terrorist attacks in Afghanistan. The complaint alleges that Soheil Omar Kabir, a 34-year-old Air Force veteran,( image by Bill Robles)  introduced two younger men, Ralph Deleon, 23, and Miguel Santana, 21, to the teachings of Anwar al-Awlaki, the U.S.-born cleric who was killed in a drone strike in Yemen. Yesterday the Judge denied bail for Kabir; Bill was in Riverside CA drawing the hearing.
More on the story see link: http://www.dailybulletin.com/breakingnews/ci_22169456 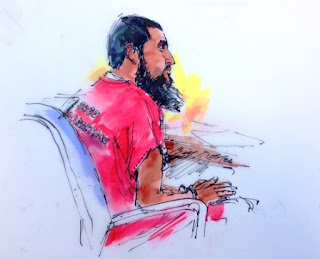 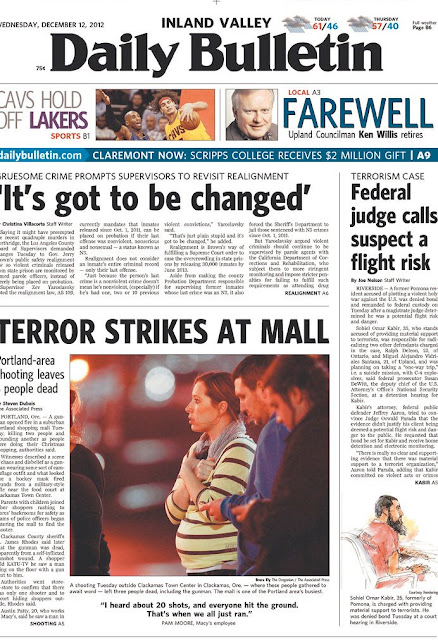 Posted by Illustrated Courtroom at 7:35 AM No comments: