13 years ago on Memorial Day Howard Brodie was interviewed  on the PBS News Hour by Betty Ann Bowser. Howard Brodie was the dean of courtroom art, beginning his career as a court artist for CBS covering the Jack Ruby Trial              ( which will be included in the Illustrated Courtroom: 50 Years of Court Art).   He was also a revered combat artist and drew on the front lines in many battles and speaks about those experiences in the interview.
Howard was a remarkable artist and person. We are honored that he agreed to be part of the upcoming book.
Below is the transcript of the interview from 1996
Link:
PBS Memorial Day Interview w Howard Brodie May 1996


A sample of Howard's court artwork: Judge Sirica from the Watergate trials 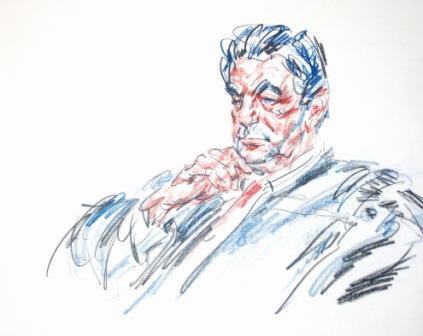 Posted by Illustrated Courtroom at 7:09 AM No comments:

Capture the Good, the Bad, and the Ugly Moments As a Courtroom Sketch Artist

Capture the Good, the Bad, and the Ugly Moments As a Courtroom Sketch Artist

This is an  article about courtroom artists, link above^.
A fact about court artists I did not know, that court artists covered the Salem Witch trials.
A painting from the trials below is in the collection of the  Smithsonian.
.

But a lot of stuff is just not true,  the fact that we arrive several minutes before a proceeding
more like several hours before, why cameras are barred and we are used, how we are paid, etc.
The upcoming court art book, www.illustratedcourtroom.com
should clear up some of this mis-information.

Posted by Illustrated Courtroom at 2:00 PM No comments:


One year ago during the Rajat Gupta trial, the first witness took the stand, and this witness below, was the first post of the blog. This post has been one of the most popular post in the last year with hundreds of unique views. The blog has had over 8000 hits/views and it is found on the first page of many Google Image searches.
Happy birthday Illustrated Courtroom!
Like us on FACEBOOK too! https://www.facebook.com/ILLUSTRATEDCOURTROOM 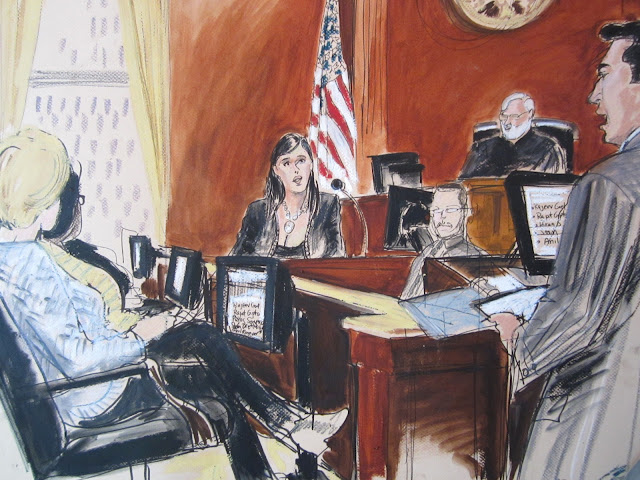 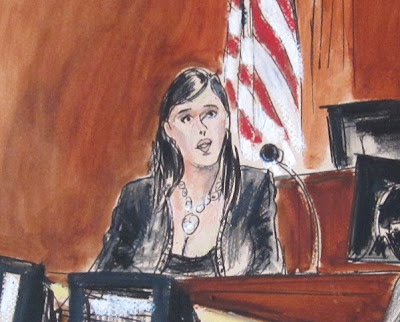 Second Witness
Ananth Muniyappa Galleon trader who bought the Goldman stock for Rajaratnam. He was quite a contrast to the previous witness Caryn Eisenberg, who came to court dressed to the 9's. He was very slight and wore an open collared shirt, no tie. 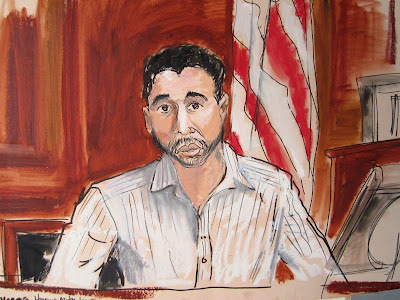 Posted by Illustrated Courtroom at 3:03 AM No comments:

James Holmes entering the courtroom, May 13, 2013 by Bill Robles

I am in the courtroom, standing by my front row aisle seat as the court slowly fills with grief stricken families on one side, and media people on my side.  There are 7 or 8, crew cut, tough looking sheriffs all over the courtroom.
As the starting time approaches, we wait for Holmes to enter the courtroom, and then silence as the door opens and he is escorted in, handcuffed, and appearing to be in another world.
With everyone in place, the judge enters 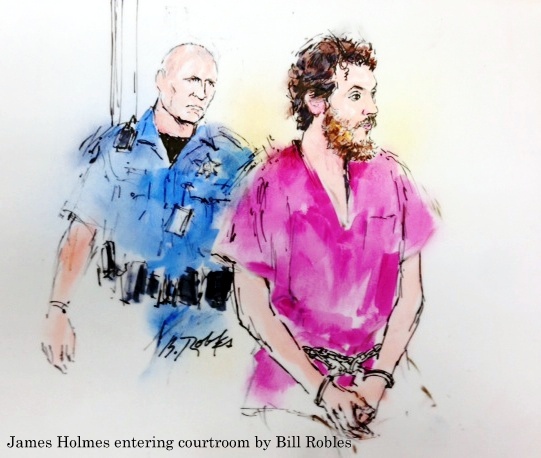 Posted by Illustrated Courtroom at 6:48 PM No comments:

THE ILLUSTRATED EVENT: NJ STATE BAR CONVENTION Day Three: Judicial Panels...: The first panel was followed by a talk on the Independence of the Judiciary by Justice Barry T. Albin. When he was finished with his speech... 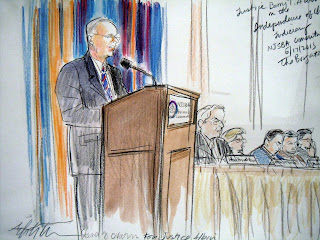 Posted by Illustrated Courtroom at 6:41 AM No comments:

THE ILLUSTRATED EVENT: NJ STATE BAR CONVENTION Day Two: Gender Bias and L...: Today at the New Jersey Convention a panel discussion about gender bias and LGNT litigtants in New Jersey. The sponsor was the Supreme Court...
Posted by Illustrated Courtroom at 6:17 PM No comments:

JACKSON TRIAL BY BILL ROBLES: One sibling at a time - Tonight News | IOL.co.za

Jackson trial: One sibling at a time - Tonight News | IOL.co.za

REUTERS
Katherine Jackson, mother of late pop star Michael Jackson, and Randy Jackson, left, watch AEG Live lawyer Marvin Putman in this courtroom sketch during opening arguments at her civil suit against the concert promoter in Los Angeles on April 29, 2013. Photo: REUTERS/Bill Roble
London - Michael Jackson's siblings have been banned from court.
The late King of Pop's brothers and sisters - including Janet, Jermaine, Jackie, La Toya, Marlon, Rebbie and Randy Jackson - will not be able to sit in the courtroom together for fear of influencing the jury in the family's $40 billion wrongful death lawsuit against AEG Live.
AEG's lawyer Marvin Putnam argued that there was "a risk in allowing any of them in the courtroom", as their seats would be close to the jury box in the Los Angeles courtroom and all of Jackson's siblings are expected to be called as witnesses in the trial, except
Posted by Illustrated Courtroom at 6:14 PM 1 comment: 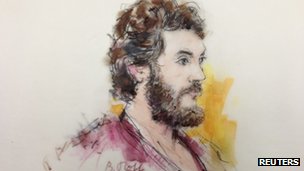 The man accused of killing 12 people and injuring dozens in the July massacre at a Batman film in Colorado intends to plead not guilty by reason of insanity, his lawyers have said. By artist Bill Robles
Lawyers for James Holmes, 25, said they would ask for the change of plea at a 13 May hearing.
A judge previously entered a not guilty plea after the defence said Mr Holmes was not ready to plead.
Prosecutors have said they will seek the death penalty.
Mr Holmes is charged with multiple counts of murder and attempted murder in the 20 July attack in Aurora, Colorado. It was one of the worst mass shootings in US history.
The attack took place at the midnight premiere of the newest Batman film in a suburb of Denver.
He is also accused of booby-trapping his apartment with explosive chemical and incendiary devices linked by wires, intended to distract emergency responders from the cinema shooting.
Posted by Illustrated Courtroom at 6:09 PM No comments: