John W. Hinckley Jr., who tried to assassinate President Ronald Reagan in 1981, will be allowed to live permanently with his elderly mother in Williamsburg, Va., leaving the psychiatric hospital where he has been imprisoned for several decades, a federal judge ruled on Wednesday.

Posted by Illustrated Courtroom at 2:09 PM No comments:

NEW YORK, July 27 (Reuters) - The relationship between a former Wall Street investment banker charged for insider trading and his father, who traded on information about mergers he learned from him, took center stage at the start of the son's trial on Wednesday.

Assistant U.S. attorney Sarah McCallum, focused her presentation on showing that Stewart knew and intended that his father would trade on the confidential information. Stewart lied to JPMorgan, Cucinella said, when presented with a list of individuals who suspiciously bought stock in 2011. The list included Stewart's father, but he did not fess up to recognizing any names on the list.
Newman is unlikely to come up directly during the trial and its holding applies more to those trading on inside information than those accused of providing it. The Second Circuit ruled that to sustain a conviction prosecutors must prove that defendants charged with trading on inside information knew the insiders received a "consequential" personal benefit for disclosing the information.
Even so its impact looms large in the background. The U.S. Supreme Court is expected this fall to consider the benefit-to-the-tipper issue in United States v. Salman, an insider-trading case from the U.S. Court of Appeals for the Ninth Circuit.

Posted by Illustrated Courtroom at 1:57 PM No comments:

Posted by Illustrated Courtroom at 7:00 PM No comments:

Former vice president of the Battery Park City Authority Kirk Swanson's federal whistle-blower lawsuit, claiming he was fired for exposing corruption in the awarding of contracts. The case's first court hearing was  before Hon. J. Paul Oetken, U.S.D.J.
Swanson, a former VP and chief contracts officer at the state agency, alleges he “discovered that high-level BPCA employees were making false statements in an effort to bypass the BPCA’s contract approval process.” 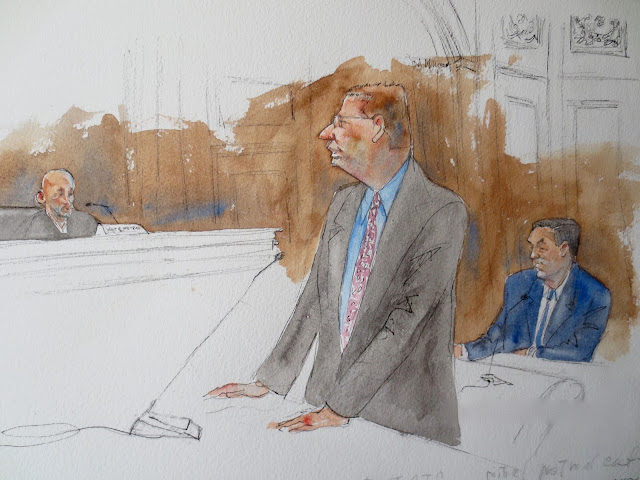 Plaintiff's atty Jason L. Solotaroff standing, Atty for defendants Battery Park City Authority, et an., Christopher D'Angelo seated. This was the first time that the case was brought before the judge. The next court appearance is scheduled for December 2, 10:00 AM.

http://nypost.com/2015/09/30/whistleblower-claims-he-was-fired-for-doing-his-job/
Posted by Illustrated Courtroom at 9:18 AM No comments:


Federal agents surprised an HSBC Holdings Plc executive as he prepared to fly out of New York’s Kennedy airport around 7:30 p.m. Tuesday, arresting him for an alleged front-running scheme involving a $3.5 billion currency transaction in 2011.


Mark Johnson, the bank's global head of foreign-exchange cash trading, was arrested Tuesday at JFK International Airport, according to multiple reports. He faces charges following a three-year investigation into currency trading practices at multiple global banks, according to the reports.
In addition, Stuart Scott, former head of cash trading for Europe, the Middle East and Africa, also faces wire fraud conspiracy charges, though he has not been arrested yet. Johnson and Scott committed the alleged violation on a $3.5 million trade, which allegedly occurred in October 2011 involved an unnamed oil and gas company that wanted to exchange U.S. dollars with British pounds. Authorities said HSBC made $8 million from the transaction.
The Department of Justice charged that "Johnson and Scott caused the $3.5 billion foreign exchange transaction to be executed in a manner that was designed to spike the price of the pound sterling, to the benefit of HSBC and at the expense of their client."
Posted by Illustrated Courtroom at 5:23 PM No comments:

U.S. Bankruptcy Judge Stuart Bernstein denied the company’s request for an injunction to protect Denton and former Gawker editor-in-chief, A.J. Daulerio, from the judgment handed down by a Florida jury until Sept. 3. Gawker attorneys said the injunction would allow Denton to focus on selling the company’s assets.

Denton testified Tuesday that a personal bankruptcy could disrupt Gawker’s plan to sell itself in an August auction, in which he would play a role marketing the company. Lead bidder Ziff Davis has agreed to bid $90 million and keep Denton on if it wins the auction.
“I’m the founder of the company,” he said, when asked whether Gawker could survive without him. “I founded it out of my apartment and I know where all the bodies are buried.”
Artwork by Elizabeth Williams
Click on image to see larger.
Posted by Illustrated Courtroom at 2:59 PM 1 comment:

Aeropostale listed approximately $216 million in assets in its Chapter 11 petition. The company, which is being represented by Weil Gosthal & Manges LLP, has lined up a proposed $160 million financing package with Crystal Financial LLC to keep the business operating.

Posted by Illustrated Courtroom at 1:32 PM No comments:

UPDATE: Supporters of Senator Bernie Sanders have lost their bid to block the Democratic Party’s use of superdelegates at this week’s convention in Philadelphia.

The First Amendment does not give individual members a right to control internal processes of the party, which is expected to nominate Hillary Clinton for president, a U.S. district court in Manhattan ruled recently in a challenge filed by Jeff Kurzon, an attorney and Sanders supporter.
Kuzon charged in court paper’s that the party’s use of superdelegates dilutes the power of the popular vote and sought a court order that would bar them from voting at the convention. The Democratic Party has 713 superdelegates, who include members of Congress and party leaders, and who can vote for the candidate of their choice. Clinton leads Sanders among superdelegates, 602-48.
“An individual’s First Amendment associational rights do not empower him to compel nomination procedures that guarantee his preferred candidate a ‘fair shot’ at winning a party’s nomination,” Judge Paul Oetken wrote in a ruling dated July 18.

As it turns out, as my lawyer, Josh Douglass( pictured), and I have discovered, the entire concept of super-delegates is in violation of the Party’s own charter. That the Democratic Party is even using super-delegates, is a clear breach of contract. It is also a violation of our constitutional rights, including the 14th Amendment of Equal Protection (our vote should hold just as much weight as a super-delegate’s!).

Last week, I instructed Mr. Douglass to sue both the Democratic National Committee (DNC) and the New York State Democratic Committee, on my behalf, over their use of super-delegates. We have requested a preliminary injunction which would cause the DNC to honor the average voter’s preference of POTUS nominee by having the super delegate votes be diminished to being proportional and in keeping with the preference of the primary voters.
Posted by Illustrated Courtroom at 9:28 AM No comments:

By Pete Brush
Law360, New York (July 14, 2016, 6:20 PM ET) -- A seven-member civil jury needed just over an hour Thursday to reject broker Steven S. Novick's breach of contract suit against two AXA units, finding the financial giant breached no agreements with the Connecticut money man when it fired him for hawking unapproved investments then reached out to some of his clients.

Members of the four-man, three-woman federal panel had no comment after their lightning-fast rejection of claims by Novick, now affiliated with Purshe Kaplan Sterling Investments and with Charles Schwab Corp.

Posted by Illustrated Courtroom at 4:09 AM No comments: