From the NY Times
Federal Judge William Pauley on Friday ruled that a National Security Agency program that collects enormous troves of phone records is legal, making the latest contribution to an extraordinary debate among courts and a presidential review group about how to balance security and privacy in the era of big data.
In just 11 days, the two judges and the presidential panel reached the opposite of consensus on every significant question before them, including the intelligence value of the program, the privacy interests at stake and how the Constitution figures in the analysis.

Posted by Illustrated Courtroom at 6:03 PM No comments:

ABSCAM by Aggie Kenny and the movie "AMERICAN HUSTLE"

The film "American Hustle," chronicles a con operation that was  inspired by a real-life FBI sting operation known as Abscam — a conflation of Abdul and scam — in which agents posing as wealthy Arabs with suitcases full of cash tried to bribe public officials. When the dust settled, three New Jersey Democrats — U.S. Sen. Harrison Williams, U.S. Rep. Frank Thompson and Camden Mayor Angelo Errichetti, who was also a state senator — were convicted.
Aggie Kenny covered several Abscam trials that took place in Brooklyn Federal Court. Numerous tapes were shown at  the trials. Jurors with headphones and the video equipment was an important part of the scene. Juries listened and saw numerous videos of meetings. This illustration below from 1981, is from the last of the 8 major trials in the Abscam sting operation, the case against Senator Harrison Williams. On the screen Harrison is shown accepting a bribe from one of the undercover agents. 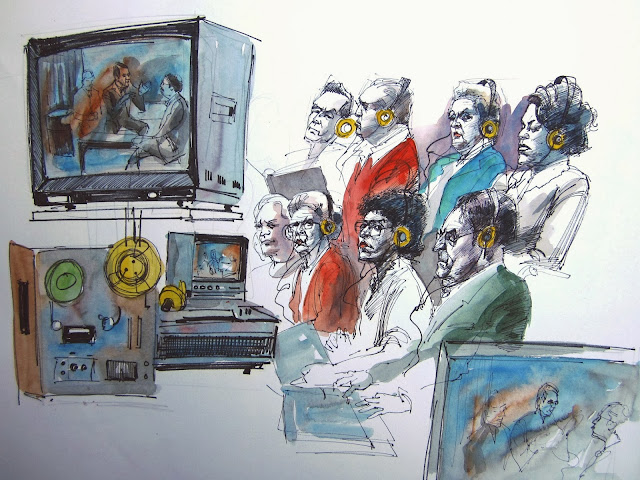 More on the Abscam case from the New York Times
link
http://www.nytimes.com/1981/05/03/nyregion/williams-s-trial-is-the-last-of-8-major-abscam-cases.html

Abscam was the most sweeping undercover investigation of political corruption ever undertaken by the Justice Department - a two-year, multimillion-dollar inquiry that involved scores of agents, secret meetings, phony sheiks, hidden cameras, bribes and a parade of Congressmen.
It sprawled over cities in four states, unfolding in hotel rooms, airport lounges, private houses and even aboard a yacht. It generated dramatic confrontations and scenes of comic relief. And it raised many legal and ethical questions - some still not resolved - over possible entrapment, self-incrimination and anonymous leaks to the press.
But, ultimately, it has led to the downfall of Congressmen and other public officials, as well as lawyers and a supporting cast of shadowy go-betweens whose boasts of influence, pledges of corruption and acceptance of cash bribes were captured on videotape for trial juries and national television audiences. 16 Persons Convicted
The conviction of Senator Harrison A. Williams Jr. of New Jersey on bribery and conspiracy charges Friday night ended the last of eight major trials spawned by the Abscam investigation. The trials have led to the conviction on corruption charges of 16 persons, including six members or former members of the House of Representatives.
Posted by Illustrated Courtroom at 1:38 PM No comments:

Notes from Elizabeth Williams:
Five years ago, on a dark rainy evening I got a call from my photo editor at Bloomberg News.
He said can you run over to the Manhattan Federal Courthouse, and cover the arraignment of a defendant who was accused of a 20 billion dollar fraud. That took me back, and I asked him, did you just say billion??
Equally stunned, he said, "yes".
During that day I had drawn Marc Dreier who was accused of a 300 hundred million dollar fraud, but something in the billions, and that many billions was shocking.
After that day, Bernard Madoff became a nationally known criminal, who ran the longest and largest Ponzi scheme in history. Currently his right hand man, Frank DiPascali is on the stand in Manhattan Federal Court disclosing details on how the fraud and scheme was carried out.

Assistant US Attorney Joseph Facciponte showing jury a large bottle of wine that was valued at 85K but was counterfeit.  Witness Truly Hardy from AMC auction house, surveying the other counterfeit bottles, is standing to to left of Facciponte. Some of the bottles of wine were purchased by Bill Koch, at six figure sums.
Defendant Rudy Kurniawan is seated far right.
Judge Richard Berman presiding in Manhattan Federal Court
artwork by Elizabeth Williams 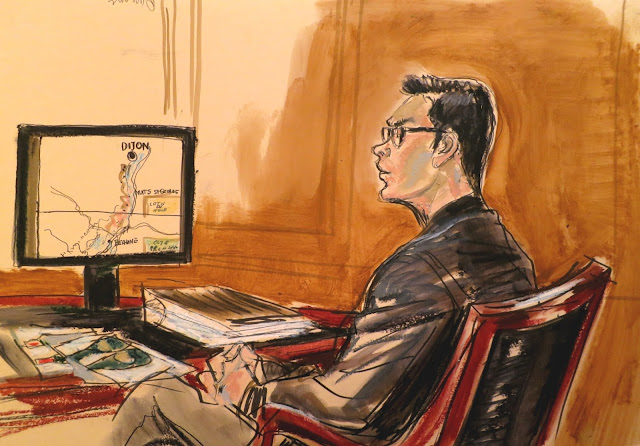 As wine counterfeiting gets more sophisticated, the industry fights back

Laser engraving, serial numbers and holograms are techniques winemakers are using as technology makes it easier to create fake bottles.

Posted by Illustrated Courtroom at 3:53 PM No comments:


The hearing took place at a detention center jail facility in Rancho Cucamonga, about an hour and forty five minute drive from my home.
I was amazed at how small, thin, and young Ciancia was. Looking at him, you would never guess that he had been shot, except for a little scar on his forehead and cheek. Regarding the thing around his neck, nobody seemed to know, but some guessed it might have been a breathing device.
The 11:00 AM hearing was in a very small conference-room with marshals, the judge, an NBC and AP reporter and me in attendance.
The hearing was very short, giving me just enough time
get this one drawing.

Bill Robles was also interviewed on the local NBC news station. Here is the link to the interview
http://www.nbclosangeles.com/video/#!/on-air/as-seen-on/LAX-Shooting-Suspect-Appears-in-Court/234534111

Posted by Illustrated Courtroom at 3:10 PM No comments:

Testimony continues into next week. He is still on direct. 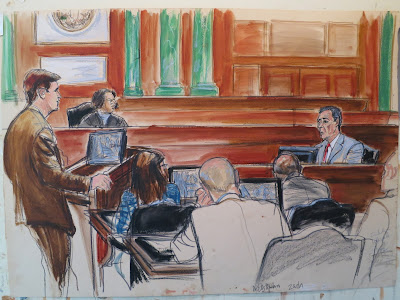 Frank DiPascali on the stand at the "Madoff 5" trial. 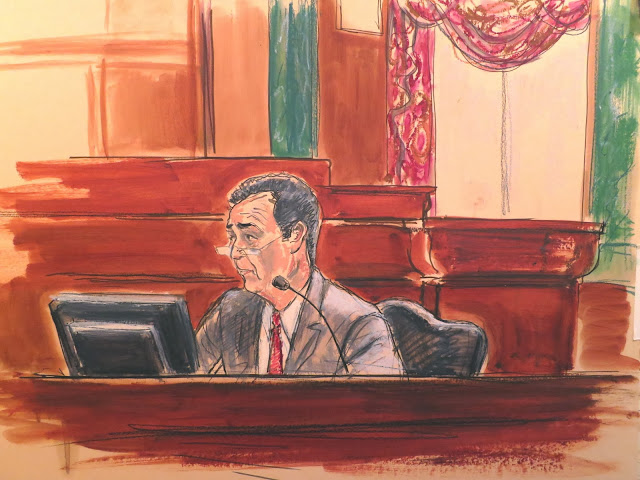 Posted by Illustrated Courtroom at 7:07 PM No comments: