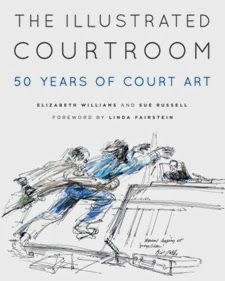 
The U.S. Supreme Court famously remains a holdout against cameras in the courtroom, and so do most other federal courts. This may be hard to defend as a matter of policy, but it has preserved a space for the unsung art of courtroom illustrators.
Published in May by CUNY Journalism Press, "The Illustrated Courtroom: 50 Years of Court Art," by artist Elizabeth Williams and crime writer Sue Russell, is a raucous celebration of five practitioners of this endangered workaday art. The moments captured here include everything, as one artist put it, "from celebrities, spies, terrorists, corporate corruption, political scandals, killers, mass murderers, celebrity custody hearings, to sex scandals, child molestation cases and military court martials." It's lucky the publisher was dissuaded from making this a children's book, as originally intended.
Court artists rival war correspondents as raconteurs, and grabbing details lurk on every page. Music fans may be stunned to hear that Black Panther Afeni Shakur was eight months pregnant with Tupac Shakur when acquitted of attempted murder. Anyone who has gone through the security checkpoints of today's courthouses will be bemused to learn that the Manson family members were permitted to carry long hunting knives into court so long as they were not concealed.
Here is a perfect match of artists and subjects: Elizabeth Williams on Martha Stewart and dapper John Gotti, Howard Brodie on Jack Ruby and the Watergate plumbers, Aggie Kenny on Jackie O. and Oliver North, Bill Robles on O.J. Simpson and Richard Tomlinson capturing a young David Boies.
Lawyers who treasure beauty should root for the Luddites in the courtroom camera debate. Court TV has been called many things, but it's never been called art.


Posted by Illustrated Courtship at 5:53 AM