From CNBC
Authorities unveiled criminal charges Thursday accusing seven people, including a banking executive once married to a star of "The Sopranos," of running a $300 million stock manipulation scheme that cheated elderly and other investors. Abraxas "A.J." Discala — the CEO of merchant banking firm OmniView Capital Advisors and former husband of Jamie-Lynn Sigler, who played Meadow Soprano on the hit HBO series — was charged in an indictment unsealed in Brooklyn, New York, with 10 criminal counts including securities fraud, wire fraud and conspiracy. Discala, 43, and the other defendants were accused of using "pump-and-dump" and other illegal tactics to artificially control prices and trade volumes in four companies from October 2012 to July 2014.

Only 3 of the defendants appeared today in Brooklyn Federal Court: Ira Shapiro, Victor Azrak, and Craig Josephberg. All defendants were given bail and were released. Judge Robert Levy presided over the arraignments. Turns out the Judge knows my work from the 1987 Billie Boggs case, he was Bogg's attorney and I covered that case.

Posted by Illustrated Courtroom at 5:56 PM No comments: 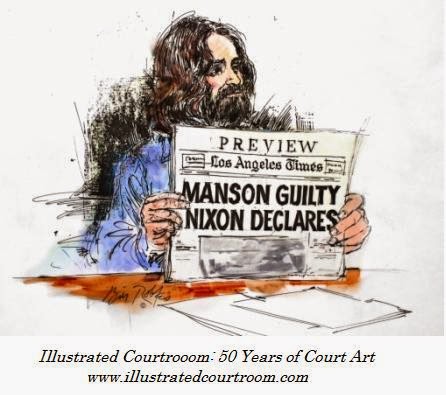 Donald Sterling and wife, Rochelle on stand by Bill Robles

Bill Robles drew both Sterlings on the stand in a Los Angeles courtroom last week.
He not only drew them, but spoke with them.

My cousin Eddie Turbay went to grammar school, Jr. high school, and high school with the Sterlings.
In brief chats, I asked both Sterlings if they remembered Eddie, and they both had fond memories of him.


Posted by Illustrated Courtroom at 6:19 PM No comments:

Donald Sterling and Wife in Court by Bill Robles

Clipper owner Donald Sterling  in court in his attempt to save his stake in his NBA Team.
art, observation and story below.

Bill Robles observations:
Donald Sterling,Tuesday July 8 this afternoon, just before taking the witness stand, in his trial. His wife is sitting across the aisle on the opposing side. He was most interesting, funny, and I think dominated the courtroom. Also Bill found out that his cousin went to grammar school with Sterling, it is a small world! 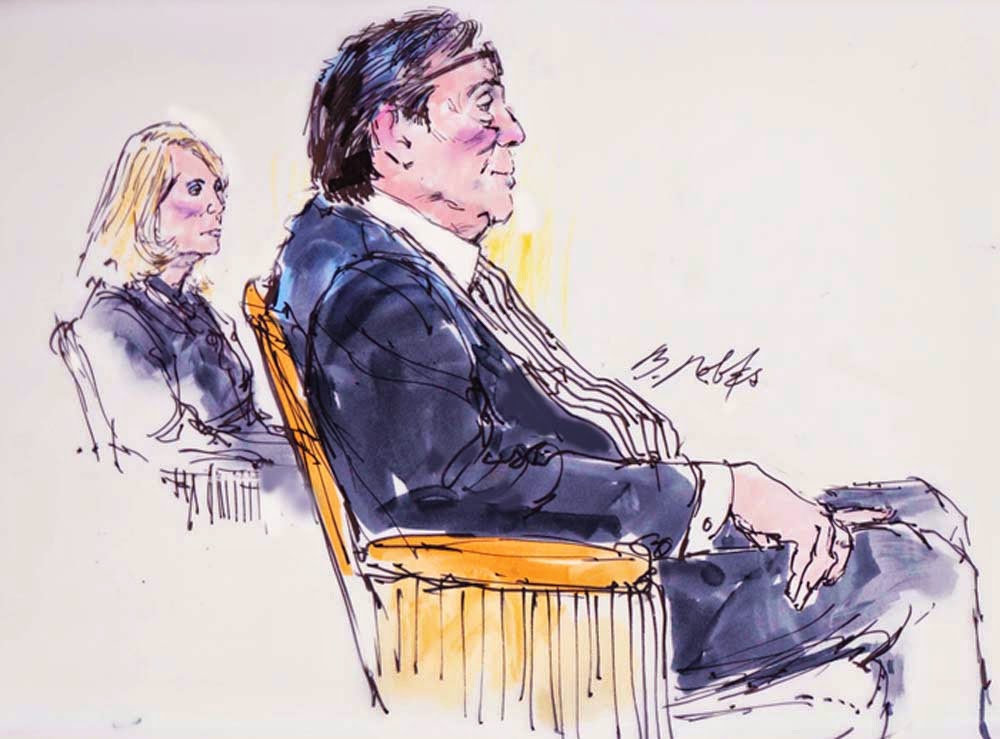 From SB Nation
http://www.sbnation.com/nba/2014/7/8/5882301/donald-sterling-los-angeles-clippers-trial-testimony
Donald Sterling, the ousted 80-year-old majority owner of the Los Angeles Clippers, is nothing if not memorable. After a fiasco involving a racist tirade caught on tape, his lifetime ban from the NBA, and the sale of his team to former Microsoft CEO Steve Ballmer, Sterling has taken his wife Shelly to court in a last-ditch effort to save his stake in the $2 billion franchise. On Tuesday, Sterling testified in front of the courtroom and things quickly spiraled out of control.
Several notable reporters were in Los Angeles to cover the trial, including ESPN's Ramona Shelburne and Arash Markazi, the L.A. Times' Bill Plaschke and Nathan Fenno and the Orange County Register's Dan Woike. Sterling's cross-examination by veteran barrister Bert Fields was the main show of the evening, which got weirder and weirder as the day wore on.
Posted by Illustrated Courtroom at 4:34 AM No comments:

From the Wall Street Journal
Federal prosecutors suffered the first defeat in their half-decade-long crackdown on insider trading Tuesday with the acquittal of Raj Rajaratnam's younger brother, a bracing reversal after a string of 81 convictions.
The loss in some ways represented prosecutors' efforts coming full-circle: The original investigation into Rengan Rajaratnam's trading years ago kick-started a probe into his older sibling that ultimately uncovered a network of hedge-fund managers and analysts sharing confidential tips and produced convictions that shook Wall Street.

It took a federal jury less than four hours to find Rengan Rajaratnam, 43 years old, not guilty of taking part in that conspiracy. The acquittal followed a rebuke of parts of the government's case by the judge who presided over the three-week trial, and comes as an appeals court is weighing a decision in a separate case that could raise the bar for prosecutors pursuing such crimes.
http://online.wsj.com/articles/jury-acquits-rengan-rajaratnam-in-insider-trading-case-1404845184
Posted by Illustrated Courtroom at 6:14 PM No comments:

note: click on link above for more information about the mural
and click on the image to see it larger
Posted by Illustrated Courtroom at 10:00 AM No comments: