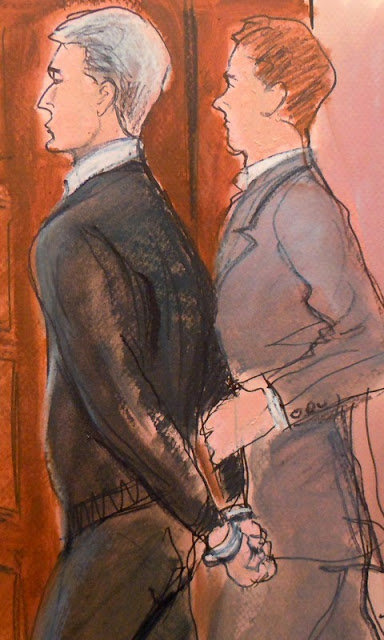 While waiting for the appearance of Michael Steinberg and the courtroom to open,
out of the elevator walked 2 FBI agents and a tall man in a navy sweater, dark pants, very coiffed
grey hair. Then I notice his hands were behind him,  that he was handcuffed and realized,
this must be Michael Steinberg.
The agents tried to enter the courtroom, it was locked so they tried to find another spot
put him, then finally decided to try the stairwell, and appears they got into the court that way.
It was moving way too fast  for me to capture on the spot, esp with no materials out to draw.
By the time we got into the courtroom,
Steinberg was seated inside  and his handcuffs were off .
So I drew this from memory. What struck me was how his head was held so high
and he was so polished looking. An odd contrast w those handcuffs.
I had read he did not want to be perp walked, they did not do it outside
but they did it in the courthouse.

Posted by Illustrated Courtroom at 2:49 PM No comments:

Today in Washington DC the US Supreme Court heard arguments about  challenges to the constitutionality of the Defense of Marriage Act (DOMA). Greg Stohr, reporter for Bloomberg News was there and filed this report.
Bloomberg Business Week DOMA article.

Many images are drawn of the court but rare are images from the  press room.
When Aggie Kenny visited Washington DC to cover the Roberts court, she  drew the press room and Greg Stohr. Note the blue blazer hanging, indicating the somewhat formal attire worn covering the court.

Posted by Illustrated Courtroom at 5:58 PM No comments:

Today Raj Rajaratnam's brother was arraigned on charges of insider trading. When I covered the Raj trial Rengan's name would come up and sometimes his photo was shown. When I finally saw him in person  it was surprising  how different he looked than the photo I saw at trial. He is much smaller than his brother, and does not look much like Raj at all.

Today was his first appearance. Judge Buchwald was assigned the case, David Massey is the Assistant US Attorney and Rengan's lawyer is Vinoo Varghese. The judge seeing these names for the first time, instead of attempting to pronounce them,  referred to Rengan Rajaratnam as Mr RR and his lawyer as Mr VV. Admittedly took me a while to learn how to say Raj Rajaratnam's name and spell it too.

Posted by Illustrated Courtroom at 7:08 PM No comments: 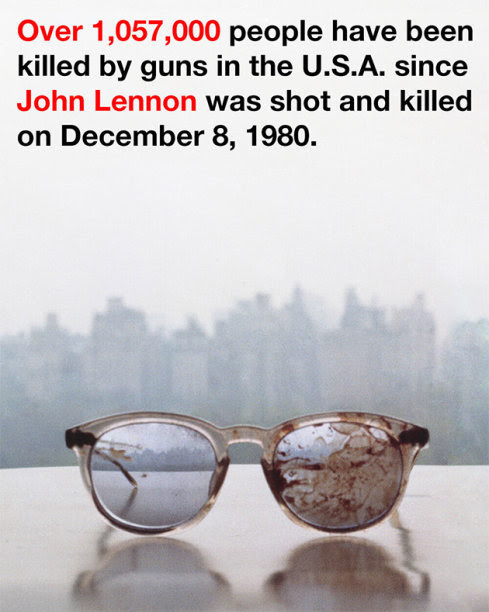 This image says so much about this tragic event.

As court artists we see the aftermath of gun violence in court:
a weeping family member, horrible frightening testimony, an awful piece of evidence.
This photo shows what words can sometimes not describe.

Below is a piece of artwork by Aggie Kenny who, as a Lennon fan, was faced with the unpleasant assignment to draw the man who shot John Lennon, Mark David Chapman; seated with a copy of Catcher in the Rye. A copy of the novel was in Chapman's possession when he was arrested on December 8.

Chapman is currently incarcerated in the Wende Correctional Facility in Alden, New York
On August 23 2012, Chapman was denied parole by a three-member board.
He may apply for his next parole hearing in 2014

Posted by Illustrated Courtroom at 3:21 PM No comments:

Update on this story, Abu Hamza was not allowed to wear his prosthetics in court when he was arraigned several months ago ( pictured).  But now in place of a hook or a rubber hand, his lawyers would like for their client to be outfitted with a spork – a combination spoon and fork. Hamza is scheduled to go trial in New York City next year, and faces the possibility of life in prison.
Posted by Illustrated Courtroom at 3:46 PM No comments: 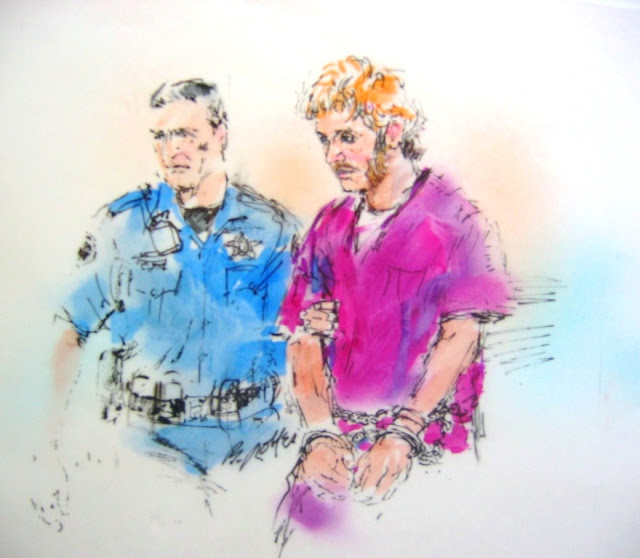 Judge orders arraignment for Colorado theater shooting suspect over lawyers’ plea for delay
Posted by Illustrated Courtroom at 4:49 AM No comments: 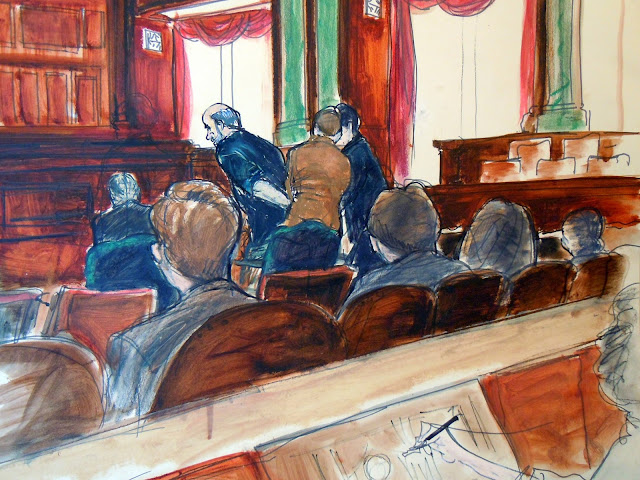 Bin Laden's son in law was composed and appeared resigned to the hand cuffs the US Marshals  placed on him after the hearing. Thought it was an interesting view esp with the law clerks looking on as this scene unfolded.They almost became symbolic Americans looking upon a relation to Bin Laden, the man who was responsible for 9/11.  Now he was caught and in US custody.


Posted by Illustrated Courtroom at 8:07 AM No comments:

3/5/13
Martha smiled sweetly at those of us in the jury box as she took the stand. My front row seat gave me a firsthand view of the Martha vibe. Although she was in a bit of a pickle, she managed to be witty, haughty, knowledgeable and combative . AK

She was testifying across the street from where she stood trial exactly 9 years ago in room 110, 40 Centre Street, the Manhattan Federal Courthouse.


Posted by Illustrated Courtroom at 11:58 AM No comments:

Update April 5, 2013
note below states that this hearing was held in the same courtroom where Martha Stewart was tried  9 year ago. As a complete coincidence Mathew Martoma just replaced Charles Stillman with one of the defense lawyers from the Martha Stewart case, Richard Strassberg who was Peter Bacanovic's lawyer.
Below is a link to the NYT story about the switch.
NYT Peter Lattman story


Today in Manhattan Federal Court in the same courtroom where the Cannibal Cop is being tried,  was a hearing regarding one of the largest cases involving insider trading in history. Mathew Martoma was a trader who allegedly  illegally used tips from a doctor  who was in charge of monitoring an Alzheimer’s drug tests to make millions of dollars.
Today his defense attorney was granted more time by Judge Gardephe to review the 4 millions pages of documents he has received from the government.
The judge granted his request, and the next hearing date is in June.
Bloomberg Patty Hurtado Story:
Bloomberg Martoma Story

Posted by Illustrated Courtroom at 6:08 PM No comments:

Last week there was a significant but not widely publicized hearing about the Argentina Bonds case. The hearing took place in the appeals court on the 17th floor of the newly renovated  Manhattan Federal Courthouse.
This is the same courthouse where the Cannibal Cop trial is taking place; that story has garnered much of the US media interest.
This case is so specific to business news,when I mentioned the Argentina Bonds hearing, people thought I was talking about a person not a country.  Indeed I made that mistake when I was first assigned.  However, the case was so closely watched in Argentina, there were quite a few reporters from Argentina covering the case and their vice president and finance minister were in the courtroom. The legal arguments sounded complex and  I could tell the court was grappling with the legal issues.  Especially Judge Raggi ( far right) was asking very pointed and concise questions of both sides,. The courts ruling was made on Friday.
Here is a story about the case and the appellate hearing
Bloomberg Bob Vanvoris story about the hearing

Below are the illustrations from the case:


Posted by Illustrated Courtroom at 3:59 AM No comments: