Yesterday, at 60 Centre Street, the NYC Dept of Health was challenged by many parties in court over the proposed soda (sugary beverage) ban. One of the issues I thought interesting was if an establishment puts sugar in a beverage like Dunkin Donuts then they must comply w the ban, but if they are like Starbucks and allow the consumer to sweeten their own drinks, then they do not have to comply.

Also you can still buy a giant drink at CVS, but not your local pizza shop. This all came up b/c the Dept of Health does not regulate CVS drug stores but they regulate the pizza shop.  The arguments were interesting but the very short argument by the NAACP lawyer  garnered a lot of  the press. 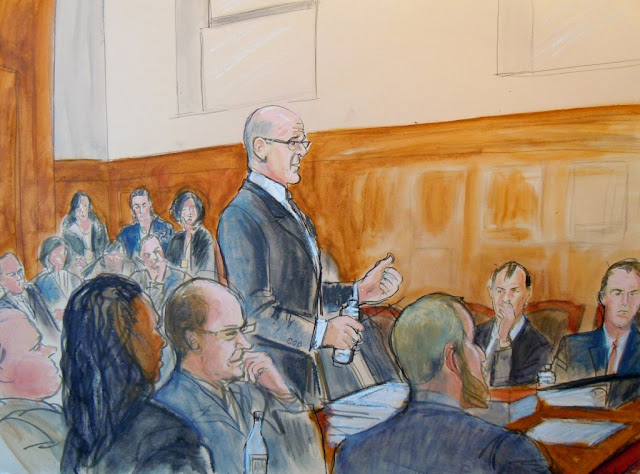 The image above from the hearing, thought  was  ironic.  While James Brandt, the lawyer  for the American Beverage Corp was speaking,  in the midst, he grabbed a bottle of water an took a sip, then held onto that bottle for a time,  I thought  was a perfect visual to capture.

Steven Molo attorney for the Korean Deli Owners Association stated a Duane Reade can sell a 20-ounce bottle of Dr. Pepper, but a corner café cannot.

“It’s a serious issue affecting small business at a time when they can least afford it. They’ve been kicked around in this economy for some time now and this ban is just imposing an additional burden on them. It’s quite unfair,” he stated to Judge Tingling.

The bottom line from what I gathered was an issue of jurisdiction, and whether the Health Dept can regulate.

The judge's ruling is pending in the case. The ban is to start in March, awaiting the ruling.
Posted by Illustrated Courtroom at 5:20 PM No comments:

Aggie Kenny covered the Supreme Court for over 40 years. This is a drawing of the Burger court that wrote the 1973 decision in Roe v Wade. Kenny made this observation,  the more junior justices sit on the far ends and as justices retire they move closer to the middle, nearest the chief justice. William Rehnquist is seated far left, with long flowing brown hair, not the typical way he is remembered.  Justice Sotomayer now sits in the seat that Justice Rehnquist first occupied.

Kenny also covered the reaffirmation of Roe v Wade later in 1988 which was argued by Solicitor General Freid.

Posted by Illustrated Courtroom at 8:41 AM No comments:

Drawn Downtown: OBAMA SECOND TERM INAUGURATION: Four years ago the nation was in a very different place. It felt like we were on the precipice of economic disaster.  There was a new presi...
Posted by Illustrated Courtroom at 6:20 AM No comments:

Today the James Holmes pre trial hearing ended in Colorado. Bill Robles has been covering the case since
the story first broke. Here is his latest image of Holmes in handcuffs seated at the defense table. Bill said Holmes was cuffed the whole time, during the hearing, the cuffs were attached to a long chain, like a long U shape, that was visible when he stood.
The judge just ruled that Holmes will stand trial.
The latest story: HOLMES TO FACE TRIAL 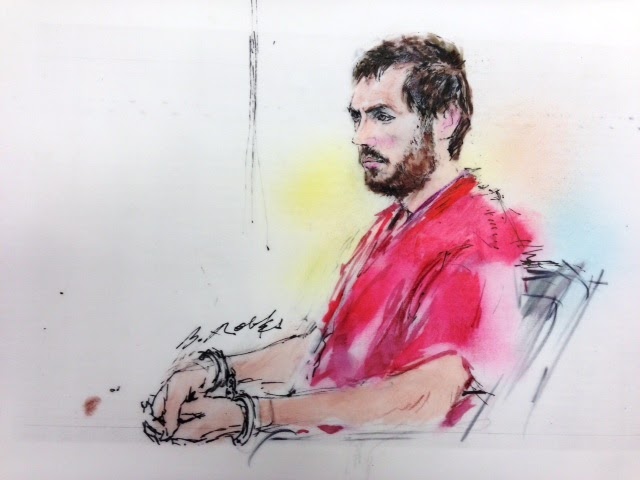 Below is a story about the case.
HOLMES HEARING STORY

Below is one of the earlier images that Bill drew from the case, when Holmes had a big head of red hair. Now his hair is cropped and he has a visible beard. 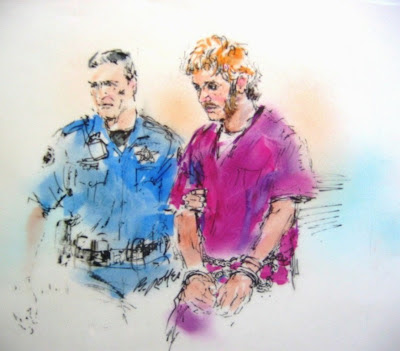 Recently Buzz Feed did an article on Bill Robles:  Link:   Buzz Feed Bill Robles
and upcoming mini doc on his work will be on YouTube.

Posted by Illustrated Courtroom at 7:33 PM No comments: 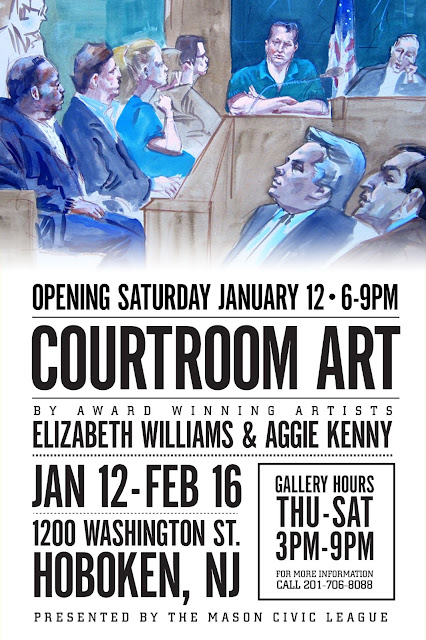 Below are selections in the show.
The artwork is hung with accompanied stories about the cases that were drawn.
Cases that are featured in the show range from Son of Sam to Jean Harris and  Martha Stewart,

Posted by Illustrated Courtroom at 2:53 AM No comments:

Mathew Martoma was formally arraigned on Thursday January 3rd in Manhattan Federal Court. The case is assigned to Judge Gardephe. Martoma stood and stated "not guilty your honor" while his lawyer Charles Stillman of Tyco fame stood beside him.  His wife was seated behind him in a white silky blouse and near by was reporter Patty Hurtado of Bloomberg News taking notes. Here is her story about the case:
Mathew Martoma Bloomberg news story 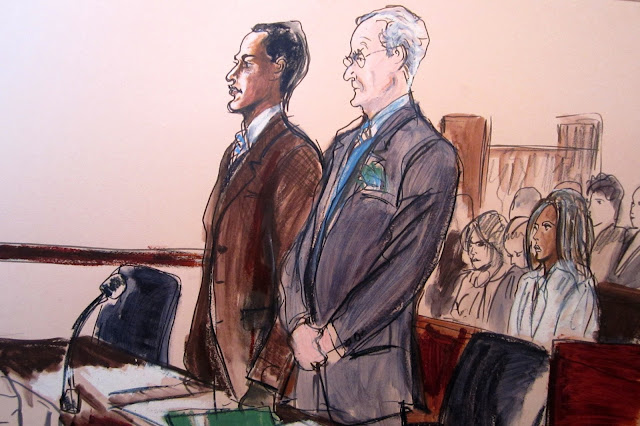 At Martoma's first appearance Mike Daly formerly of the Daily News and now the Daily Beast, wrote an insightful article about Martoma case and how Steve Cohen is similar in some ways to the Teflon Don, John Gotti, former head of the Gambino Crime family.

This is an interesting excerpt from the Daly story.

Martoma’s name was Ajai Mathew Mariamdani Thomas until 2001, when he followed the example of his father, who had changed his own name from Thomas to Martoma two years before. A more profound change seems to have taken place in the young man who wrote two papers about medical ethics at Harvard Law and served for a time as deputy director of the Office of Genome Ethics at the National Human Genome Research Institute in Bethesda, Md. He then decided to translate his interest in bioscience into profit, proceeding from Stanford Business to a small Boston hedge fund and finally to the monster money machine, Cohen’s SAC, in 2006. SAC has averaged a 30 percent return since it was founded in 1992.


Posted by Illustrated Courtroom at 5:41 AM No comments: