John Kinnucan pleaded guilty yesterday in Manhattan Federal Court in front of Judge Deborah Batts.  His appearance was quite different than when I drew him in March. He had lost a lot of weight; his prison uniform hung off his shoulders and had grown a significant beard. His responses to the judge were very clear, he stared straight ahead when reading his statement, which was rather brief.

During the March appearance he was looking around, was much more robust, with a closely cropped beard. Both appearances were rather short, and Judge Batts was awaiting the verdict in the Larry Seabrook trial yesterday. The jury on that case has been deliberating for about a day, so this plea was taken during the lunch hour.

Posted by Illustrated Courtroom at 5:44 AM No comments:

ANIL KUMAR then and now

Last week Anil Kumar the former McKinsey director was sentenced to 2 years probation in Manhattan Federal Court by the Judge Denny Chin, the same judge who sentenced Bernard Madoff almost 3 years ago to 150 years. Kumar was a start witness at the Raj Rajaratnam trial and his testimony and tapes supported the prosecution's case. The tapes of Rajaratnam and Kumar showed both men had engaged in insider trading. 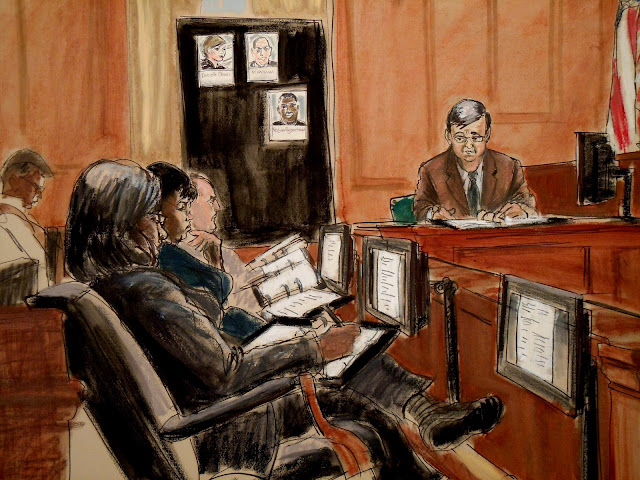 This  illustration of Kumar on the stand at the Raj trial, going through the transcript of the tapes as they are played for the jury, showed his sheepish look, as he checked to see the jury's demeanor.


In contrast his testimony at the Rajat Gupta trial there were no tapes of Kumar and Gupta and  no accusations that Kumar engaged in any illegal activity with Gupta. Rather he was on the stand to establish the relationship between Gupta and Rajaratnam. His testimony was not so key and he was far more engaged with the jury and appeared less concerned. He would face and speak to the jury when he responded to almost every question the prosecutors posed. 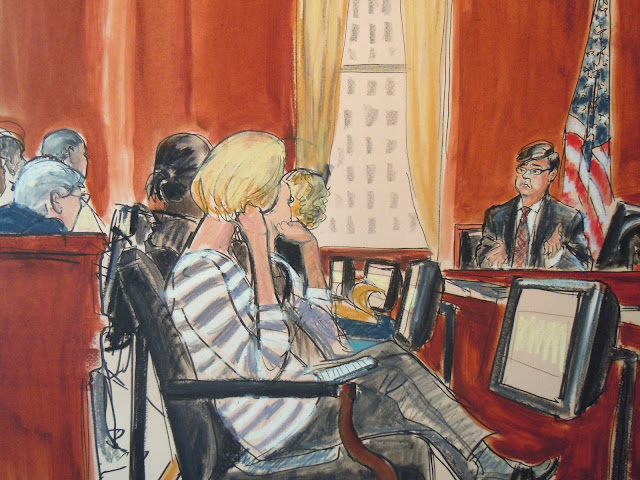 Both Rajat Gupta and Raj Rajaratnam were found guilty of insider trading and Rajaratnam is serving out an eleven year sentence and Rajat Gupta is awaiting his sentencing this fall.

Posted by Illustrated Courtroom at 9:41 AM No comments:

ROBERT BLAKE THEN AND NOW

Robert Blake recently made news on the Piers Morgan Show on CNN
http://www.cnn.com/2012/07/12/showbiz/blake-piers/index.html


Here is an illustration Bill Robles drew of him during his trial, his hair was gray back then,
no hair dye in prison. 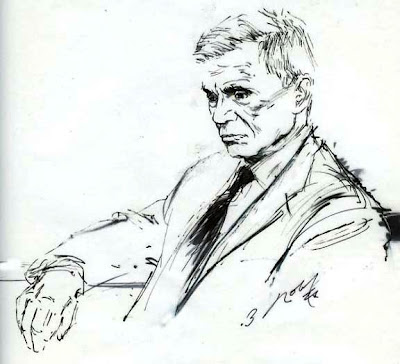 Posted by Illustrated Courtroom at 7:54 AM No comments:

Charles Keating  was a major player in the savings and loan crisis of the late 1980's and early 90's.  Keating was a banker who ran American Continental/Lincoln Savings and Loan which went bankrupt. Many investors lost their life savings.   His involvement with 5 US Senators, dubbed the Keating Five ignited a huge scandal.
Story link
http://www.nytimes.com/1993/07/09/business/keating-sentence-12-1-2-years.html 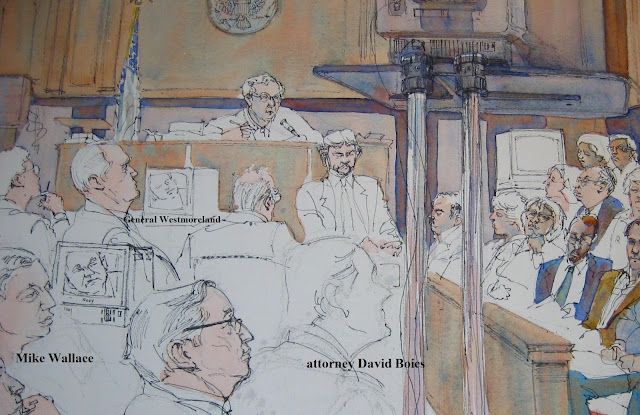 Last night on 60 Minutes the show played an interview with Mike Wallace, pictured here in this court illustration by Aggie Kenny.  Wallace spoke about the trial of General Westmoreland v CBS and  stated how the lawsuit caused him to become so depressed he tried to commit suicide. The trial ended in an out of court settlement.

Today Bob Diamond, CEO of Barclays resigned amid a Libor-rigging scandal that occurred in 2008.  Two years ago Diamond was on the hot seat in the Southern District of NY Bankruptcy Court over the lawsuit of Lehman vs Barclays. Lehman claimed that Barclays took advantage of the market chaos of 2008 to get an unfair" windfall profit".
I recall Judge Peck( pictured here) got rather irked  and said he felt that Mr Diamond was being evasive at times when questioned by Lehman's  lawyer Robert Gaffey.  Judge Peck is such a thoughtful and deliberate judge to see him get annoyed stuck in my mind.
Will be interesting to see how Mr. Diamond performs before a British parliamentary committee next week.

http://www.businessinsider.com/barclays-ceo-bob-diamond-faced-a-rebellion-in-new-york-over-the-libor-fixing-scandal-2012-7
I recall  Robert Gaffey grilling Mr Diamond and getting frustrated when he would not directly answer the questions. That frustration showed all over his face.  Seated next to Mr Gaffey is the famed lawyer David Boies, who represented Barclays Bank.
Posted by Illustrated Courtroom at 1:37 PM No comments: